In Scott Chang-Fleeman’s first year of farming, he worked long grueling days by himself. He farmed 2.5 acres on his own, doing all the planting, harvesting and packing. He did all of this before going to his job as a line cook at night.

Looking back now, Chang-Fleeman says he probably should have hired someone to help, as doing everything alone took a toll on his mental and physical health. But at the time, he didn’t even consider it. He put his head down and he powered through.

“I just had this idea in my head I had to do the whole season on my own, which I definitely don’t think I had to do, and I would have been way better off [hiring someone],” he says.

Chang-Fleeman began his farming journey with an apprenticeship while he was studying at USC Santa Cruz. After he graduated with his undergraduate degree in environmental studies, he thought he would go and work on other farms before starting his own. He could learn more while not taking a big risk. But a couple opportunities came along quickly that were too good to pass up.

During his apprenticeship, Chang-Fleeman started a personal project growing organic Asian heritage vegetables. He originally didn’t have plans to turn this project into a business, but as chefs heard about what he was doing, he realized there was a huge need and lack of these kinds of vegetables. His project gained the attention of Brandon Jew, the chef of the Michelin star restaurant, Mister Jiu’s, who was having difficulty finding certified organic Asian heritage vegetables.

Jew asked Chang-Fleeman if he would grow vegetables for his restaurant, which was an opportunity he couldn’t resist. Chang-Fleeman says that simply having the one restaurant customer provided an anchor to build his farm business around.  “A lot of folks just start,” he says. “But it’s hard to just start growing vegetables and then try to sell them three months later.”

Around the same time, Chang-Fleeman found five acres of land he could lease around an hour north of San Francisco, which came with a lot of infrastructure, including a barn, a greenhouse and an irrigation system. His lease included access to his landlord’s tractor and rototiller. The land was also in an area with similar conditions to where he learned to farm in Santa Cruz. This became the home of his farm, Shao Shan Farm.

He now primarily grows Asian vegetables, including Chinese cucumbers and cabbages, as well as various types of bok choy. As a bi-racial farmer with an Asian American mother and a white father, Chang-Fleeman says growing these vegetables is a way of reconnecting with his own heritage. He says his family largely lost its connection to this culture through years of assimilation, having lived in the United States for four generations. For others in the community, his farm is an important project in preservation and visibility for their culture.

“It’s very rewarding for me to be able to hold this resource for the broader community, who do have very deep connections to these plants and foods,” he says. 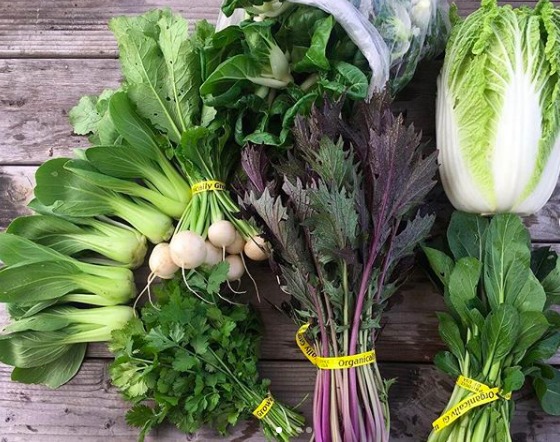 While he started by primarily serving restaurants, the pandemic forced him to shift to selling most of his vegetables through a CSA in his second season. He was able to use a grant from the National Young Farmers Coalition to buy new harvest totes to meet the demands of his new CSA. In his first season, his sales were 80 percent direct-to-chef, but that number has shrunk to below 20 percent this year with the pandemic.

Chang-Fleeman also now employs two workers (one part time and one full time) to help with operations. He has been able to step back and not work such crazy days, and is no longer working his kitchen job. He says that relinquishing control of some tasks has made it easier to function this year without burning out.

“I really wish I could go back and tell myself to just hire someone, and be willing to hire the help and be willing to accept I don’t have to do everything on my own. I think I would have ended in even better shape last year if I had just hired somebody,” he says.

He knew that this year, there was no way he could continue to do it alone, as he planned to double his acreage and market. He says he didn’t realize how important it was to accept hiring employees, until he had his own crew.

Despite the fact that hiring employees may have made Chang-Fleeman’s life easier in that first year, there are things he gained from working alone that he doesn’t regret. He says he was able to attain a great understanding of his land and was able to reinvest more back into the business. He wanted to make sure he had the necessary structure in place to pay his employees fairly and to treat them equitably. Working alone also let him figure out how his farm was going to work before bringing anyone else into the operation. “It would have been hard to get an employee to understand how you want to farm when you don’t know or understand how you want to farm yet,” he says.

The post Year One: You Don’t Have to Farm On Your Own appeared first on Modern Farmer.