Travis Mattison and his family have become accustomed to a steady rush of customers reserving one of their free-range turkeys in the weeks ahead of Thanksgiving.

But this year, for the first time, the Mattisons’ Brockport, New York farm—Ridgecrest Turkey Farm—has been struggling to fill orders for the upcoming holiday.

Mattison started raising about 1,200 birds in July. He says his family has long prided themselves on the fact that their meat is fresher and larger than an average grocery store turkey, but doesn’t use growth hormones or antibiotics. Up until October, Mattison thought there was a chance the turkeys would be snapped up as they have been in years past, but with state recommendations to limit family gatherings, the farm’s 20-45 pounders have not been selling.

“You think you’re going to get ahead and then you don’t. It’s just been a rollercoaster,” he says, adding that the price of turkey feed has also shot up. “It doesn’t always work out… but I’m ready for 2021.”

Mattison is about 20 percent behind in sales compared to last year. Like so many other farmers this year, Mattison is having to pivot to ensure his turkeys make it onto kitchen tables. He’s opting to cut up the birds to sell by the part. He’s also reaching out to local businesses to see if they will buy whole turkeys to share among their staff.

With the pandemic raging on, health officials are advising against large gatherings and recent polls show that 68 percent of Americans plan to spend holidays differently this year. Industry experts say that small to mid-sized local farmers might have more flexibility adjusting their operations to accommodate the need for smaller birds fit for household gatherings, but producers say it means extra labor, higher costs and more planning without even knowing if their meat will sell. 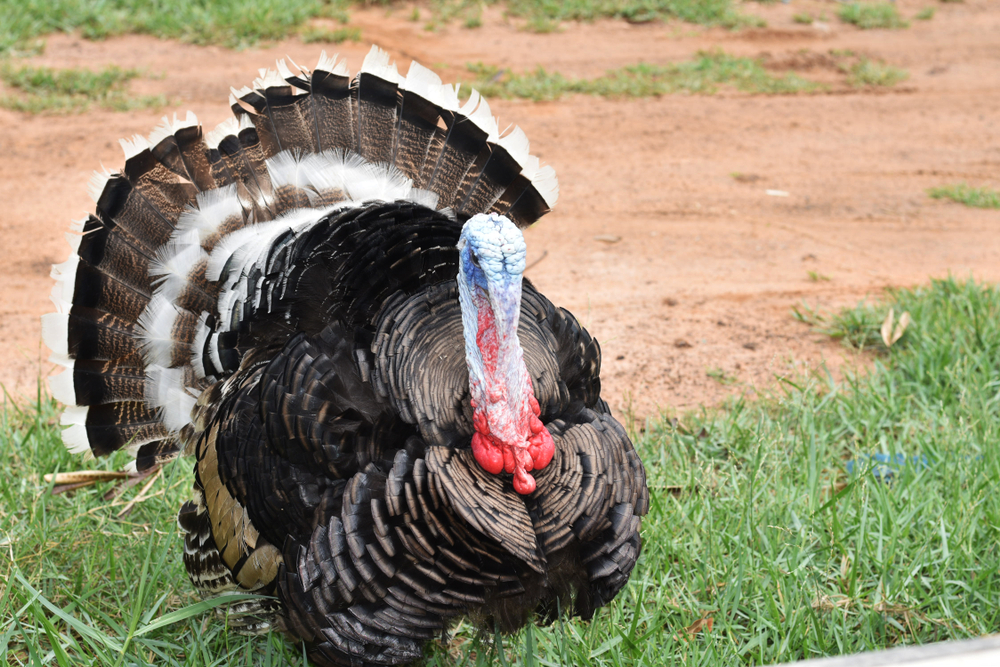 Photo by Jan phanomphrai on Shutterstock.

In Pescadaro, California, Dede Boies has had to dig into her wallet to ensure she is prepared for any demand in smaller birds. Boies, whose heritage turkeys were born in May, says by mid-summer she knew Thanksgiving wouldn’t look normal this year.

“It’s a little nerve wracking… If turkey sales are not where we planned them to be, then that’s going to impact us significantly,” she says, adding that if she isn’t able to sell the meat by December, it would put her in the red.

She’s paying her processor an extra dollar per turkey to cut the birds in half, as she is receiving so many inquiries for smaller size turkeys. Boies also decided to harvest half of her 200 birds two weeks early so they didn’t grow anymore. She has needed an extra facility to store them, which has cost an extra few thousand dollars.

But unlike Mattison, Boies also raises chickens and ducks. She’s made an effort this year to fatten up those birds in case people might prefer them. On Friday, she launched online sales.

Alabama turkey farmer Jesse Murphy says he’s currently 60 percent behind his turkey sales compared to the same time last year. And every single customer who has put in orders so far has requested a smaller turkey. He says he’s used to customers asking for the biggest bird he’s grown.

To adapt this year, Murphy says he’ll harvest his birds earlier. Depending on additional orders that come in, he might also have some birds cut up to sell for parts. At this point, his main concern is that he might not be able to sell everything.

“When the COVID-19 pandemic started and people went to the grocery stores and there was no food there, small farmers stepped up and were able to increase production to feed our communities,” he says. “We’re all still out here, waiting on them to come buy stuff from us again.”

Murphy says his year has been turbulent, ridden with stress and anxiety. But he has been comforted by connecting with a number of smaller, local farmers across the country through social media. It has reminded him he’s not alone in his struggle. For Murphy and other turkey farmers, Thanksgiving signifies the year is almost over, which means they’ll soon get a fresh start.