There was a time when almost every woman’s wardrobe across Southern India would hoard a stack of Telia Rumal sarees or kerchiefs. Sadly, the heritage ‘Telia Rumal’ weaving pattern with its intricate floral motifs, enclosed by geometric borders and patterns is slowly disappearing from the handloom scene of India.

The story of this fabric which boasts of the coveted Geographical Indication tag dates back to over a hundred years ago to a time before the British import of cheaper power loom products took over the textile industry by storm. Today, the Telia Rumal survives in pockets and parcels of Andhra Pradesh, mostly restricted to a handful of weavers’ communities, who have carried forth the tradition through generations. 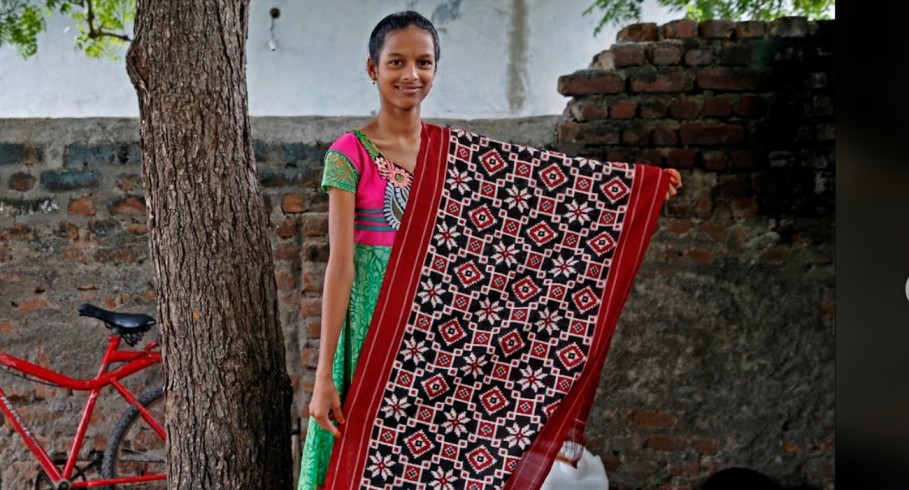 The ‘well-oiled’ fabric adored by fishermen and Arabian merchants alike

In the early 19th century, this double Ikat weave dominated the coastal districts of Andhra Pradesh, gaining prominence under the expert craftsmanship of the weavers of Chirala — a coastal region in the present Prakasam district of Andhra Pradesh. Gradually, the handloom technique gained popularity which the weavers in Nalgonda district soon adopted.

Being situated on the coastline, Chirala’s access to the sea enabled maritime trade with Africa and the Middle-East. Soon, Telia Rumal earned immense popularity in the Middle-Eastern market for its unique texture, patterns and longevity.

There is an intriguing reason behind the terminology of this weaving pattern. The word ‘Telia’ is derived from Til (sesame) since the yarn for the textile is ideally treated with castor ash, sesame oil along with sheep dung at times for longer colour retention. The entire method of processing the yarn takes nearly 21 days. Furthermore, the well-oiled threads helped retain moisture and protected the skin from dryness when worn in the extreme desert climate of the Arabian lands. While the generous use of oil makes the fabric soft, it also renders a distinct smell to the same.

The term ‘Rumal’ refers to a handkerchief or its slightly larger counterpart — a kerchief or scarf. Where the Arabian women wore this fabric as headgear, the men in the Middle-Eastern countries fashioned keffiyehs or turbans from the material.

In India, the Nizams and wealthy Zamindars of Telangana favoured the Telia Rumal for turbans as a symbol of their power.

The fishermen in Andhra Pradesh and Maharashtra adopted the same as a comfortable loincloth (lungi) or shoulder cloths — one of the reasons being that the intricate weaving pattern prevented salty seawater from seeping through. Rumour has it that the oily aroma of the fabric also helped attract fish, which is why the fishermen preferred it as their ‘lucky’ gear.

To the uninitiated eye, the colours on a Telia Rumal fabric will appear to be plain black, red and white. However, the hues of red range from crimson to cinnabar, brown and maroon red, coupled with white on black. The extract of the fruits of Aal or Indian mulberry (Morinda tinctoria) lend it the characteristic red colour.

One might spot the Telia Rumal’s similarity with the more popular Pochampally Ikat or Nalgonda Ikat. However, weavers believe that the Telia Rumal is far superior to these fabrics — in texture, structural integrity as well as the hard work that goes into it. In the present market, the Telia Rumal is being preserved and revived by only a handful of handloom enthusiasts.

Padma Shri awardee weaver Gajam Govardhan takes precedence among them. It was Govardhan who helped secure the prestigious Geographical Indication tag for the fabric recently.

“In 1975 I visited Chirala while working for the Ministry of Textiles and then I decided to revive the craft,” Govardhan had shared in an interview with The Hindu, adding that the craft was an integral part of his family heirloom. Through international exhibitions and festivals, he helped promote the dying handloom style on a global scale, creating a new market demand for the same.

When Govardhan started his campaign for the revival of Telia Rumal, hardly 20 families were involved in weaving the same. He trained over 800 other artisans who helped produce the fabric in bulk. With an expanding market, the Telia Rumal was thus no longer restricted to being a scarf or a saree at most. Instead, the pattern started appearing on dress materials, dupattas, drapes etc. Initially, geometric and floral patterns dominated the Telia Rumal domain. At the same time, the later craftsmen branched out to a more diverse platter — adapting animals, birds, wildlife and even modern-day objects like clocks or aeroplanes on their weaving canvas.

“Weavers prefer not to weave this anymore”

“The revival of the Telia Rumal faced another setback in the early 1990s with the advent of the power loom,” says Madhurima Bhattacharya, a graduate student of textile designing at NIFT-Bengaluru.

The consequent reduction of yarn subsidies following the market liberalisation also hampered its production. The intricate warp and weft of the double-weave Ikat, followed by the tie-dye process of colouring, was impossible to be replicated by the power loom and only had to be accomplished by expert handloom weavers.

“A single piece of Telia Rumal takes around two months to be completed. The fragile economic condition of the original weavers does not permit them to spend such elaborate time on a single piece of cloth. Hence they prefer not to weave the same anymore,” adds Madhurima. “Though there are a few designers who are now showcasing the Telia Rumal in their collections, the original form is long lost, and the craft has been largely contemporised,” she adds.

This World Handloom Day, it is high time we stand by our traditional textiles and celebrate the beautiful craftsmanship of the incredibly talented artisans of our country.