In the early 1990s, Kuthambakkam, a village located on the outskirts of Chennai, Tamil Nadu, was riddled with several issues like illegal liquor trade, poverty, poor infrastructure, domestic violence and Dalit discrimination. But today, all these issues are a thing of the past thanks to the efforts of Elango Rangaswamy, 61, a researcher, engineer and activist.

In 1996, seeing the condition of the village, Elango gave up his government job in Chennai and returned to Kuthambakkam to run for the panchayat elections as an independent candidate.

His win ushered in a wave of change in the village. From providing housing facilities for the villagers, creating a ‘Panchayat Academy’ to educate and train local leaders in Tamil Nadu to putting an end to the alcohol black market, Elango has done all this and more, to raise the standard of living in the village.

In these difficult times where the world is grappling with a pandemic, Elango has used his expertise in science and has developed a solar-powered disinfectant which he aims to provide to women self-help groups across India in order to increase job opportunities.

Dedicating His Life To Kuthambakkam

After completing his schooling in Kuthambakkam, Elango Rangaswamy moved to Chennai for his higher studies at the Institute of Chemical Technology. Soon after his graduation, he was employed by Oil India as drilling Executive Engineer.

“I was among the privileged Dalit families in our village. My father had a government job so the opportunities that I had access to were many. And because of this I was able to go study in the city unlike my friends in the village. So, when I started working, I felt dissatisfied that I wasn’t doing something towards the upliftment of my own society or village,” says Elango.

In 1994, he quit his job and joined the Council of Scientific and Industrial Research [CSIR] in Chennai and started commuting back and forth from the city to his village in order to stay connected with his people.

“I wanted to use my education for the benefit of the village, so in 1996, I decided to run for the panchayat elections as an independent candidate. When I won, I knew there was a lot of change that I could bring about through this opportunity,” he explains.

Elango was the panchayat head from 1996-2006, and brought in several monumental changes and initiatives like the ‘Panchayat Academy’ to train leaders of local governing bodies. Till date, it has trained more than 700 panchayat presidents. In 2000, he also created a one-of-a-kind colony under the name ‘ Samathuvapuram’ to promote equality. With 50 twin houses making up the entire colony, each twin house was occupied by a Dalit and a non-Dalit family.

Besides these initiatives, Elango was also instrumental in putting an end to the illicit alcohol trade in the village which helped in reducing the number of alcoholic patients as well as cases of domestic violence.

“In a village with 50% Dalit population, there is a lot of discrimination and isolation. As a result, they tend to miss out on many opportunities provided by the government. Luckily, I was able to act as a bridge for them,” he explains.

A ‘Job Generating’ Innovation During COVID-19 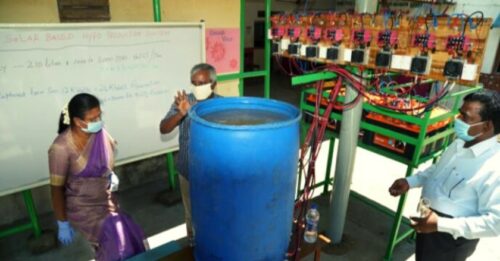 Soon after the first case of the COVID-19 was reported in India, Elango started looking for ways to help the community at a larger scale, and innovated a Fully Solar Operated Sodium Hypochlorite (HYPO) Solution Production System which can be used as a disinfectant.

“Sodium Hypochlorite (Hypo) solution is one of the most widely used disinfectants and is created by electrolysing the common salt dissolved in lower concentrations like 4 to 5 percentage solution in an electrolyser by passing DC current in controlled conditions. This process is usually done using AC to DC rectifiers which draws grid current. But in this system, instead of grid current, the innovative method of using solar current is adopted by using the appropriate size of solar panels,” he adds.

Elango’s innovation is not only the mere replacement of AC to DC rectifiers but is using naturally available solar power which saves the burning of coal or burning of oil or any other fossil fuel.

“The only raw materials required for this innovation are salt and water. It has been created in a user-friendly manner so that anyone with a basic understanding of the system can operate it easily and therefore increase job opportunities for women in rural areas, in particular,” he explains. 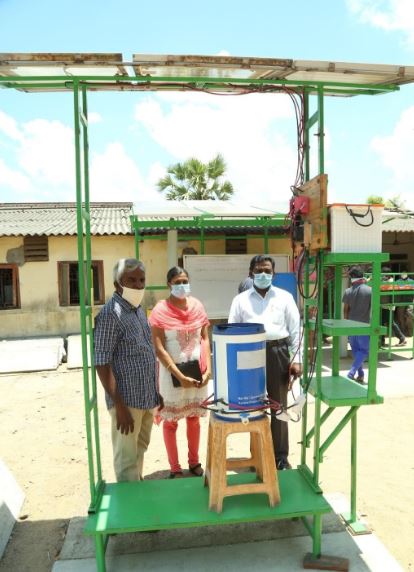 “The system operates at maximum 12 volt DC, so the chances of getting an electric shock is also nil. Besides that the system is a decentralized process, giving the opportunity to produce these systems in more and more places in India,” he adds.

Nalini Nayak, the Secretary of the SEWA (Self-Employed Women’s Association) Union, Thiruvananthapuram had expressed interest in knowing more about the system when it was first introduced to her.

“SEWA is a trade union for women workers in the informal sector, and many of our members are struggling to find employment opportunities. That’s when I came across Elango Rangaswamy’s innovation. This is definitely a viable option for workers in the informal sector considering today’s situation and can help them regain economic stability to a great extent. As of now, we’re organising sessions with our members so that they get an idea about the system,” explains Nalini.

“One 25 litre unit which is available at Rs 80,000 can cater to more than 200 families and can help disinfect large areas like apartments and the production of the disinfectant can help create job opportunities for several rural women. Moreover, these systems also make our towns and villages self-sufficient in terms of energy as well,” he concludes.

You can reach out to Elango Rangaswamy at [email protected]