This article has been sponsored by Britannia

Growing up in Tamil Nadu in the 1980s, Sumathi R was a stellar student throughout school and college. She always dreamt of giving back to society through her own eye care clinic and persisted in obtaining a Bachelor’s degree in Optometry. Her focus and diligence eventually led to her becoming a scholar in her respective field, which she then followed up with an MBA degree in Hospital Management.

However, with marriage and motherhood, Sumathi realised that her family needed her undivided attention. After her second child was born, she quit her job to look after the children and the household. However, deep inside her heart, she always knew she wanted to get back to her first love — optometry. All she needed was the right opportunity at the right time!

Earlier this year, she came across an advertisement for Britannia Marie Gold’s My Startup 2.0 contest and decided to submit her business idea for an eye care clinic in her town, Kanchipuram and as fate would have it, she ended up winning the prize money of Rs 10 lakh!

Sumathi is not alone with such an ambition. According to a 2018 survey, 48% of Indian homemakers had entrepreneurial dreams when they were young. The survey also revealed that 1 in 4 housewives try starting up their own businesses but often give up due to lack of support, financial difficulties, lack of confidence, or household responsibilities.

This initiative by Marie Gold wants to address this issue and propel homemakers to become homepreneurs. A homemaker is the nerve-centre of the family, the CEO of the house who ensures the daily smooth running of the home. She also has ambitions but they often take a backseat as the mountain of responsibilities stare at her every day.

‘My Startup Contest’ helps to fuel the ambitions of such homemakers by giving them financial support and functional training. A majority of winners from season 1 have already begun their entrepreneurial journey in various parts of the country. This year, in the second season, the top 10 homemakers won Rs 10 lakh each whereas the top 10,000 won customized online skill development programmes by the National Skill Development Corporation (NSDC). On 29 and 30 June, the top 50 finalists presented their ideas to a jury in a virtual event after which the top 10 winners were announced. 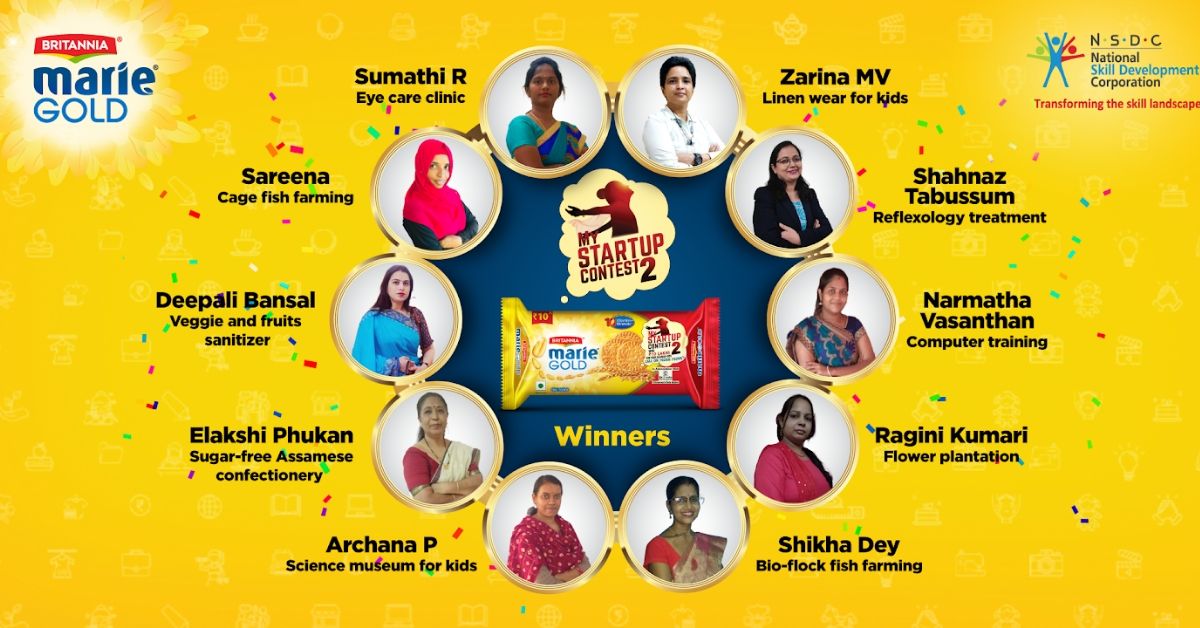 Be it Sumathi, or Elakshi Phukan from Assam who wants to begin her own bakery and catering business, or Zarina MV from Telangana who plans to create linen wear for kids — these women and their inspiring stories are proof of the fact that nothing is beyond their reach. The My Startup 2.0 contest has given them a much-needed boost in making their dreams come true. #kyunkibahutkuchhaikarna.

Have a look at their inspiring journey: