Rajasthan-based bookseller, Narendra Kumar, never imagined that he would practice the lyrics of this patriotic song one day and grow moti (pearls) at home.

In fact, no one in his family or friend circles is into farming. The closest he ever came was growing tomatoes and brinjals at home. A resident of Kishangarh, Rajasthan, the 45-year-old completed his BA and has been running a bookshop with his father for the last ten years.

“While growing up, I watched programmes on farming and always wondered what it must be to grow food. Sitting at the bookstore also, I end up watching farming videos on YouTube. As we don’t own any farmland, I never pursued my interest. But then, I came across a video that said one doesn’t necessarily need land to practice farming. Inspired by that video, I started growing vegetables,” Narendra tells The Better India.

He was content and satisfied with the healthy harvest at home until he came across a video on pearl farming.

Amused that pearls can be grown artificially, Narendra started spending more time on learning about pearl farming. He no longer had any excuses. He had the will, the passion and the space at home. What he lacked was guidance.

So, he underwent a 5-day course on ‘Freshwater Pearl Farming for Entrepreneurship Development’ at Central Institute of Freshwater Aquaculture (CIFA) in Bhubaneswar in 2017. He recommends this course to understand the technical process.

Every year. CIFA felicitates students who have been successful in the execution process. Dr Shailesh confirms that Narendra has been chosen for next year. He had invested Rs 40,000 to set up his farm in 10×10 feet area that fetches him close to Rs 4 lakh every year with zero maintenance.

Narendra grows two types of pearls — designer (moulded to various shapes and designs) and round — that take one year and 1.5 years to develop, respectively.

The mussels are kept in fresh water for 24 hours before being shifted to the pond. Once there, they are given food for 15 days to determine or reduce their mortality rate. Once their needs are clear, the process of inserting the nucleus begins.

Narendra explains, “Pearl nucleus are carefully inserted inside each mussel and immersed in water (at a temperature of 15-30 degree Celsius). Algae is added as food for mussels. A year later, the nucleus gives a pearl sac collecting calcium carbonate from the mussel shells. The nucleus covers it with hundreds of layers of coating that finally forms exquisite pearls.” 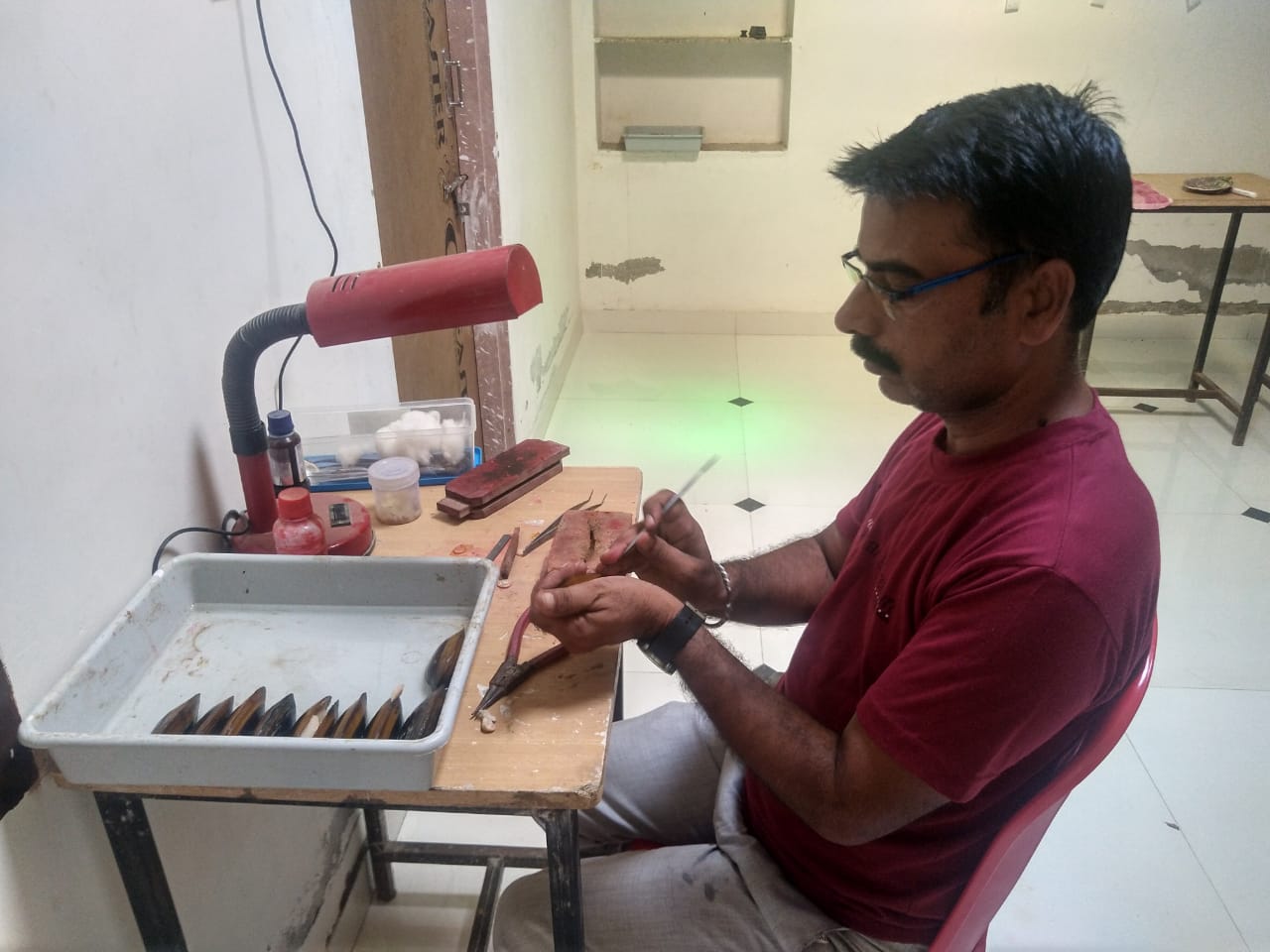 While there is no monetary cost in maintaining the pond, one has to be vigilant and ensure the water level, the health of mussels, the presence of algae and so on.

Narendra recommends keeping the pH level between 7-8 to avoid mortality, “If the ammonia is not zero, change 50 per cent of the water or add chuna (lime) to increase the levels. Most importantly, you have to be patient for a year,” he adds.

Once the pearls are ready, Narendra sends them to a laboratory. Depending on the quality, one pearl can fetch anywhere between Rs 200 to Rs 1,000.

Over the years, Narendra has improved his output and produces around 3,000 pearls every year. The mortality rate of the mussels has also dropped from 70 per cent to 30 per cent.

Realising the importance of training, Narendra recently started taking classes on pearl farming and has taught around 100 students of all age groups.

“When I began in this direction, my family mocked me saying it’s impossible to grow pearls at home. No one encouraged me. But I don’t want others to be discouraged and started conducting 2-day workshops with certificates of completion. This workshop also gives me an additional source of revenue,” he says.

Natvar Acharya, one of his students, gives an insight into the workshop, “Before joining, I thought that two days would not be enough. But Narendra simplified the process for us and patiently answered all our queries. It was beneficial, and I have already grown 700 pearls.”

One of the best things that have come out of pearl farming for Narendra is a secure livelihood and constant cash flow.

Lockdown has affected his bookstore as customers have significantly reduced. Since pearl farming is done at home, he is taking full advantage of this period and giving more time to his pursuit.

“The lockdown has given me enough time to figure out how to scale this and grow more pearls. I am certainly going to double it by next year. For people who have an interest in farming, I highly recommend pearl farming, as it requires fewer investments and gives more returns,” concludes Narendra.