Practising Mallakhamb—a sport which includes gymnasts performing gravity-defying feats—in his backyard in the States to perform at the Statue of Liberty, Chinmay Patankar is a US proponent of this traditional sport.

Back in 2013, when he decided to take up his childhood sport, often described as ‘yoga on a pole’ in the US, Chinmay was unaware of the impact he could make. Today, he teaches Mallakhamb in various states of the US such as Pennsylvania, New Jersey, San Francisco, Los Angeles and making his impression in Canada and Poland in Europe.

Hailing from Pune, Maharashtra, this financial banking professional was introduced to this sport, which involves wrestling grips, aerial yoga poses and gymnastics, at the age of nine, and he pursued it until 2003.

During this time, he excelled in the sport and performed publicly at Ganesh festival, events and other competitions in Pune. He also won Maharashtra’s prestigious Shiv Chhatrapati Award for sports in 2003, recognising his work in the field.

Eventually, academics and career took priority over the sport and Chinmay flew to the USA after completing his MBA degree at IIM Kozhikode in 2009.

“I did not find any time to go back to the sport for 10 long years. Mainly because of my professional commitments and moving places in the US,” Chinmay says.

In the summer of 2013, Chinmay settled in Edison in New Jersey when he began thinking about the sport again.

“I finally had a permanent house and a backyard. I could not resist the urge to get my hands back on the Mallakhamb pole. The pole itself is about 8 to 10 feet, and the sport requires about 20 feet of ceiling space. So the backyard was thought to be a safe place,” Chinmay adds.

Within weeks his friends and the power of social media spread the news about his activity. “I had no idea that Mallakhamb would get so popular here. Friends who knew about the sport joined, and we practised it on weekends,” he adds.

Chinmay continued to teach children for a couple of years, but he didn’t want to stop there. “The idea of practising the sport in my backyard and teaching to a closed group of Indian friends was that it was safe. And in case of injuries, there were no doubts that my friends would sue me,” Chinmay chuckles.

But many non-Indians became interested and wanted to learn the sport, which pressed for the need to bring a structure to his teaching methods. In 2015, a couple of his close friends decided to start the Mallakhamb Federation USA.

“People approached us saying they knew about the sport but never came across anyone who teaches. We formed the body to cover the liability, promote and encourage the sport. My visa does not allow me to start a business. A couple of friends, who have permanent citizenship, and my wife, Pradnya, on their permitted visas set up the body with the core principle of running it as a ‘Not for profit’ organisation,” Chinmay explains. 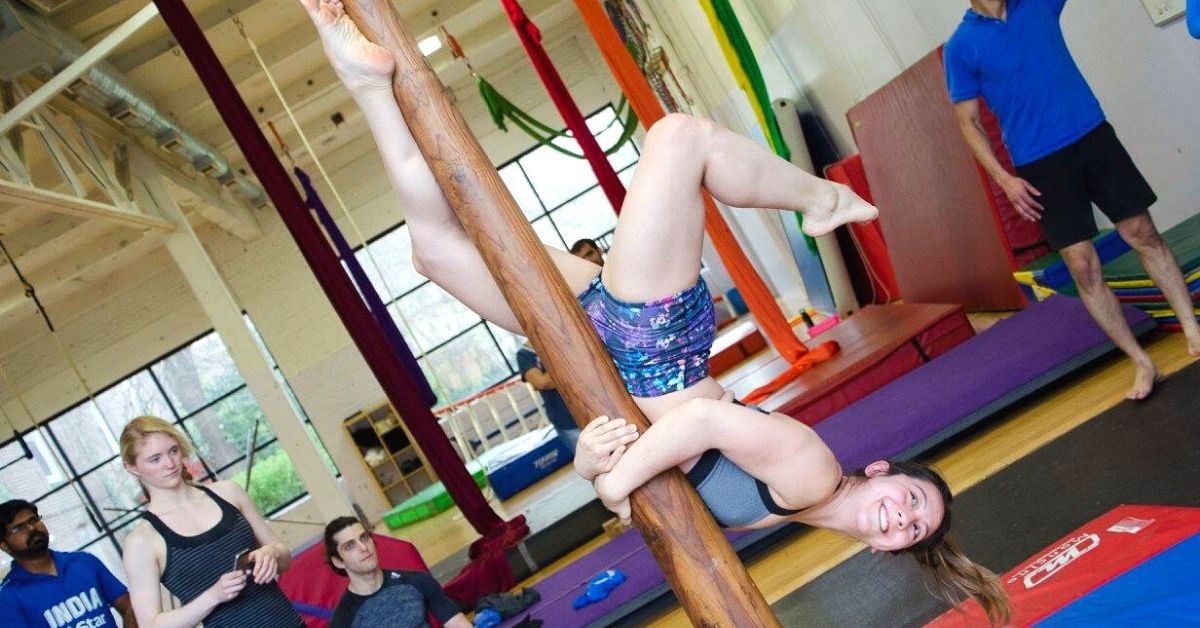 In 2015, Chinmay with 15 trained children performed Mallakhamb during the Diwali festival at Times Square, New York.

“We performed with the association of Maharashtra Tourism Development Corporation (MTDC), a government body that promotes tourism and received $ 3,000 as donations,” Chinmay says.

Since then, they performed the sport at the Statue of liberty, Boston Children’s Museum, Lincoln Center of Performing Arts and other areas.

In 2017, Chinmay also demonstrated the sport at the United Nations for the first time to do so.

Chinmay and Pradnya also invested in charting out a curriculum to form a certificate course. The course is taught at basic, intermediate and advanced levels along with some coaches the federation has managed to train. Their book, also available on Amazon, has sold 2,000 copies online.

Chinmay says there is no straight answer to his success and becoming famous. “It is the charm of the sport that attracts people. We never approached anyone in the initial years. People knew about Mallakhamb, but there was no one to teach. We happened to kickstart the process,” Chinmay adds.

The Non-Resident Indian (NRI) says the reason behind the popularity in different parts of the US is the rewarding nature of the sport. 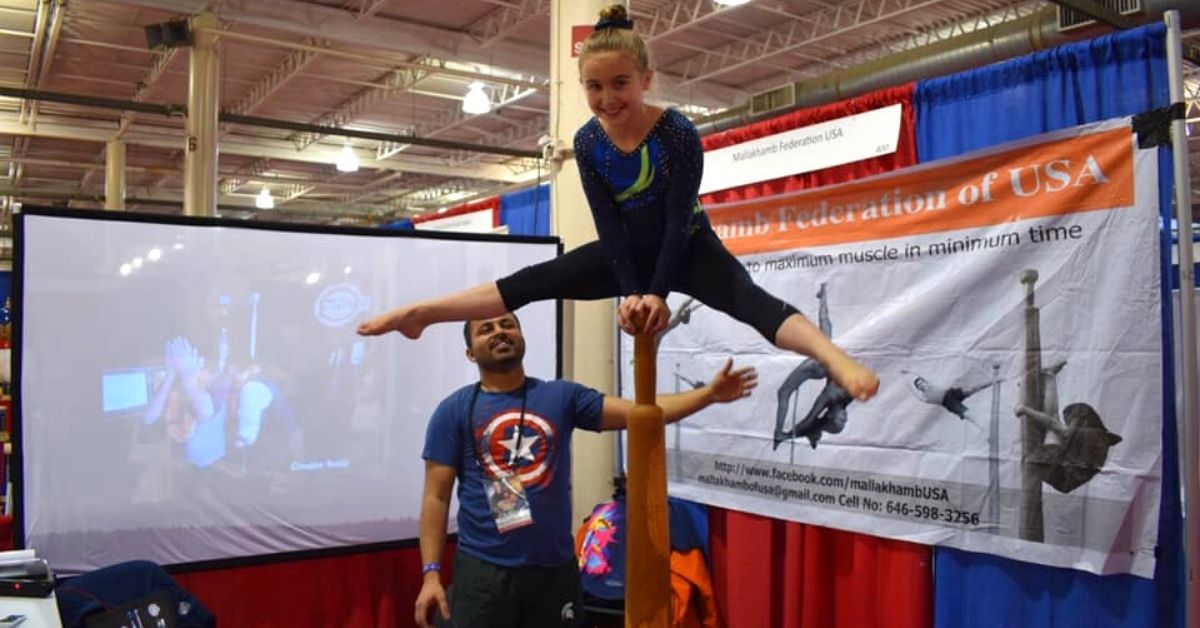 “When students climb an eight feet wooden pole and use some core strengths to pull off visually astonishing postures, it gives them a different sense of achievement and confidence,” Chinmay says.

The Mallakhamb practitioner describing an incident says, “A student came to inform us that Mallakhamb helped her in roller-skating as her core strengths improved. The flexibility and agility are a part of what the sport gives.”

The other benefits of improved health, he adds, are better immune systems and increased tolerances towards allergic substances.

Speaking about challenges, he says, “As we demonstrated Mallakhamb with young boys, the audiences doubted if the sport was gender-neutral. The sport was perceived as gender-biased and even aggressive at times.”

To rectify this misconception, the Mallakhamb Federation USA then involved girls. “We consulted doctors and experts to find out if the sport harms girls in any way. Fortunately, it didn’t,” he adds.

Every weekend, Chinmay and other coaches teach children between the age group of 4-14 years for a fee and to interested adults up to the age of 40 for free.

During the weekdays, Chinmay wakes up at 5 am preparing for work and spending evenings by exercising and focussing on various initiatives to promote the sport.

To fulfil a growing demand 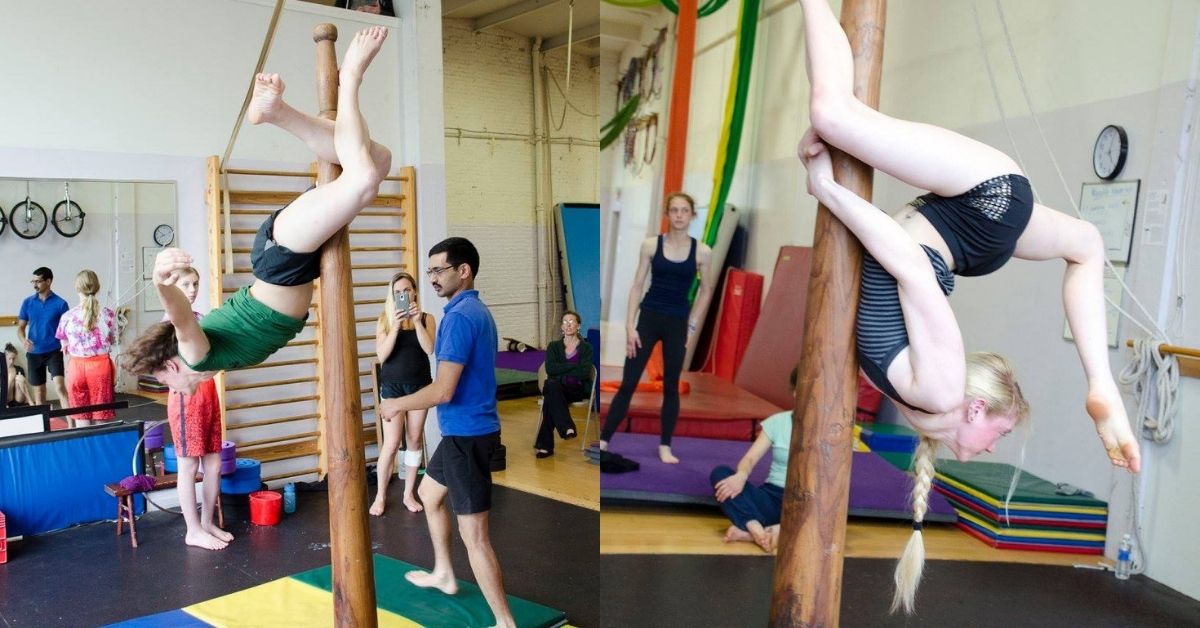 Speaking about the financial challenges, Pradnya, Chinmay’s partner and president of the federation says getting the right coaches and attracting finance is the biggest challenge.

The coaches in the US cost a hefty sum of about $6,000 a month. Many Indian coaches are willing to migrate but are not well-versed with the American style and language of teaching the sport.

The federation is trying to create new coaches through the existing teachers. “We are also deriving a sustainable model where American youth can get certificates, earn money and make a career out of the sport. Two such students have been trained in LA and Philadelphia centres,” Pradnya says.

“We have trained over 700 people in the past few years and wish to involve 1,000 more. There is a growing demand from people across the US,” Pradnya says, adding that there are five centres eagerly waiting to open, but they’re facing financial constraints.

“The not for profit feature limits our spending all the money earned from coaching in investing it back in the federation. We require about $10,000 to start a centre along with the coach, the pole and mattresses,” Pradnya says.

Watch Mallakhamb Federation USA performing at the governor’s island on International Day of Yoga, in 2018.

The federation needs an additional $50,000 to start new centres identified in Houston, Boston, San Francisco and Virginia. “We do not have enough poles, and we need to have a dedicated coach. The recent mention in PM Modi’s Mann Ki Baat gave us a big boost. We have written to the Government of India to provide us with some poles or subsidies to accelerate the promotion of the sport,” she adds.

Speaking to The Better India, Pradnya says the couple and members of the federation would only feel successful if the sport becomes commercially sustainable in the USA. To achieve this the federation is planning to get better exposure by organising the Mallakhamb World Championship, which is scheduled to be held in 2021 in Manhattan.

Chinmay says, “There are more visitors in Manhattan for an event than it would be in Mumbai. The wider reach could help get some financial support or funds along with promoting the sport.”

To donate to the Mallakhamb Federation USA, click here.