Mandar hurriedly completes his chai and poha for breakfast as the clock strikes 10. He does not want to be scolded by his grandmother for being late again to school. The 12-year-old from Thane’s Fangane village runs to the courtyard only to find his ajji (grandmother) missing.

He lets out a sigh before loudly calling out, “You’re late this time. We have to finish revising the math tables today.”

Meanwhile, Shantabai, his ajji, scribbles something in a notebook and confidently walks towards Mandar, who begins the class.

At 76, Shantabai, who has age related-ailments, like hearing issues and joint pains, is keenly decoding the world of numbers so that she can boast to her friends once her school – Ajjbaichi Shaala (grandmother’s school) reopens after the pandemic.

She is gracefully dismissing ageists and shattering stereotypes.

Shantabai joined the one-of-its-kind and probably the only school for grandmothers in India in 2016 with a hope to be able to read Dasbodh, a holy text in Marathi.

“Although I was happy about adoring the school uniform, a bright pink sari, for the first time in my life, I was scared on my first day in 2016,” Shantabai admits, adding, “It was very cathartic to see my grandson dropping an old lady like me to school. I have been illiterate all my life so I wanted to learn to sign my name before I die.”

“If you want to test my tables, I am ready,” she says confidently and adds that she can sign her name, identify the bus numbers and of course read the Dasbodh.

Shantabai’s inspiring yet heartwarming tale of learning is one of the many in the parched village of Fangane, Maharashtra. 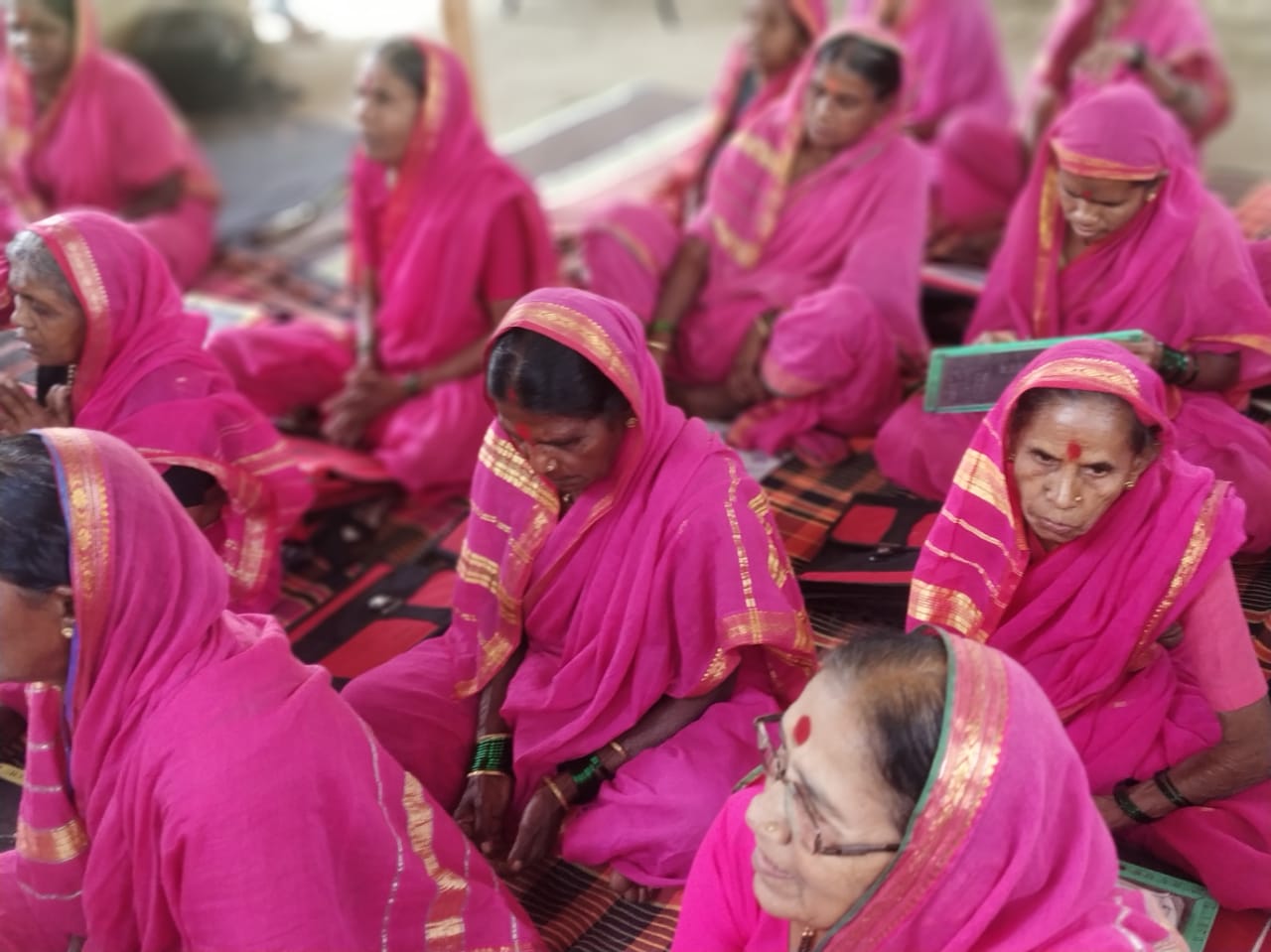 Plagued by problems of drought and subsequent farming crisis, this nondescript village shot to fame in 2016 with the opening of the shaala. Regional reporters flocked from across Maharashtra to meet the person who felt providing literacy to a bunch of old women aged between 60-90 was important.

The school is the brainchild of Yogendra Bangar, Zilla Parishad teacher, who was posted in the village in 2013. He was supported by The Motiram Dalal Charitable Trust (TMDCT) and together they are running the school that is free for the unlettered grannies.

Read More: From 0 to 56 Students: How One Man’s Vision Transformed a Maharashtra Village

Sheetal More, a class nine graduate is the appointed teacher who was taking classes from Monday to Friday between 2-4 pm in the afternoon before the lockdown was imposed.

Thirst For Education in a School

Having grown up in the rural landscape of India, Yogendra has the first-hand experience of studying in classrooms with broken benches and insufficient teaching staff. So, he became a government school teacher to address these issues.

As a primary teacher, he was also actively engaged in educating the villagers about government schemes to solve basic issues of water and sanitation. With the help of TMDCT, Yogendra was instrumental in bringing potable water to the village through rainwater harvesting pits and civic water pipelines.

His efforts made him a local hero among the villagers and soon he was accepted as one of their own.

Going back to 19 February 2016, the birth anniversary of Chhatrapati Shivaji Maharaj, when people gathered to read the holy text of Shiv Charitra, some elderly women expressed their desire to read it. This caught Yogendra’s attention.

“It was a casual comment by one of the elderly women that eventually manifested into a school. I asked them if they would be willing to learn basic literacy and all of them jumped at the opportunity. What impressed me the most was that some of them followed up with me the next day. Their willingness and thirst for education won my heart,” Yogendra tells The Better India.

Seeing their efforts, a villager gave a room of his house for the school at no cost. Sheetal was hired at a monthly salary of Rs 1,500 by the trust.

As all the grannies were denied an education because of their gender, Yogendra decided to launch the school on International Women’s Day, March 8, and the entire village was decorated with flowers and fairy lights.

“It was like Diwali,” Shantabai recollects, adding, “Yogendra had hired dhol players to take out a short procession. All of us danced and sang our ways to school. Can you think of a better way to start school?”

Sheetal, whose mother-in-law is also a student, took some time before establishing a protocol in grandmother’s school.

This school was in complete contrast to a regular one as shouting at the elderly was not an option. Teaching women, who are experts as homemakers and more knowledgeable than Sheetal at life skills, was challenging.

And every student comes with a different problem – some cannot hear properly, some shiver as they write and then some are afraid to speak in class.

“Dealing with ajjis requires a lot of patience. Their learning, understanding and grasping pace is slow. Sometimes they even forget lessons taught in the previous class. Being stringent with elderly and my mother-in-law who I respect a lot is not easy. But despite these problems, they don’t miss class,” says Sheetal.

This spirit is reflected in every student, including Hosabai, who is fulfilling her mother-in-law, Anusuya’s dream. The 94-year-old Anusuya passed away just four days after enrolling in school.

There are no grades and exams at school and anyone aged 60 or above can join. Sheetal teaches alphabets and numbers in Marathi to 30 students. 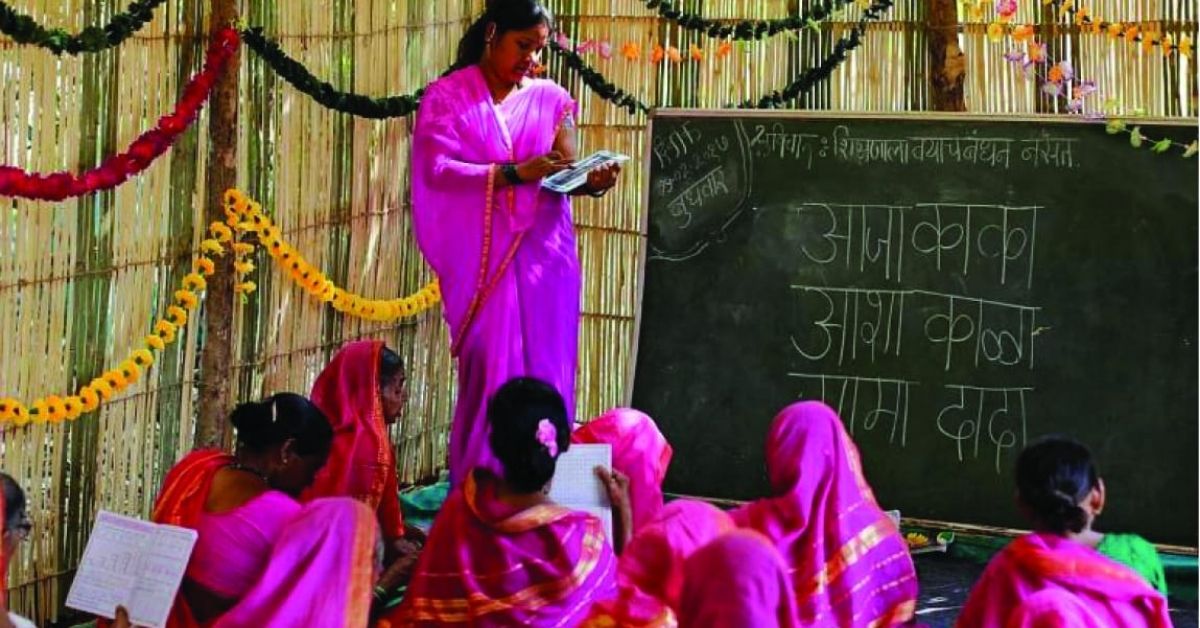 The general atmosphere of the classroom oscillates between laughter, nervousness and confusion. Every time someone makes a mistake, others are very encouraging and offer help. The occasional giggles are reserved for when they are asked to write a sentence or narrate a story of their choice.

“These women are embodiments of sisterhood and it is so heartwarming to see them leaving behind their problems at home. Yes, the chatters can get longer than usual but this classroom gives them a chance to share a peal of laughter,” adds Sheetal.

Amidst the usual banter, homework and classes, these women have aced basic skills. Signatures have replaced thumbprints at ration distribution shops and money transactions have become easier.

For many grandmothers like Shantabai, education has allowed them to bridge the generational gap with their grandchildren. Shantabai spends at least 30 minutes daily with Mandar studying.

“Reading newspapers and spending time with my grandson has given me a new purpose at this age. Without this school, I wouldn’t have made new friends and learnt so much. It’s never too late to start fresh,” adds Shantabai and excuses herself to learn multiplication from Mandar.

All images are sourced from Yogendra.