The authorities at the Port Blair International Airport in Andamans looked at Vijayanand Shembekar with suspicion. They called him aside and inquired about his bag, which was full of waste coconuts. It took Vijayanand a few minutes to explain his passion for making artefacts out of the fruit.

The intervention soon turned into a full fledged conversation, in which the 59-year-old traveller ended up showing hundreds of images of his unique hand-made artwork made from coconuts – all of them displayed at his art gallery, called ‘Ashirwad Kaladalan’, in Alibaug. This episode took place in 2018, Vijayanand recalls.

“Oh don’t worry, I am used to weird stares and questions from people. My family also labelled me crazy when I started this, 12 years ago. But my childhood passion for making the best out of waste and the inner satisfaction keep me going,” Vijaynand tells The Better India.

Vijayanand goes to the office during the day, and creates breathtaking masterpieces by night. He claims to have made around 400 artworks – from miniature vehicles to temples, animal figures and home decor items. He uses waste, broken and damaged coconuts, coconut husks, leaves and stems to carve the pieces. 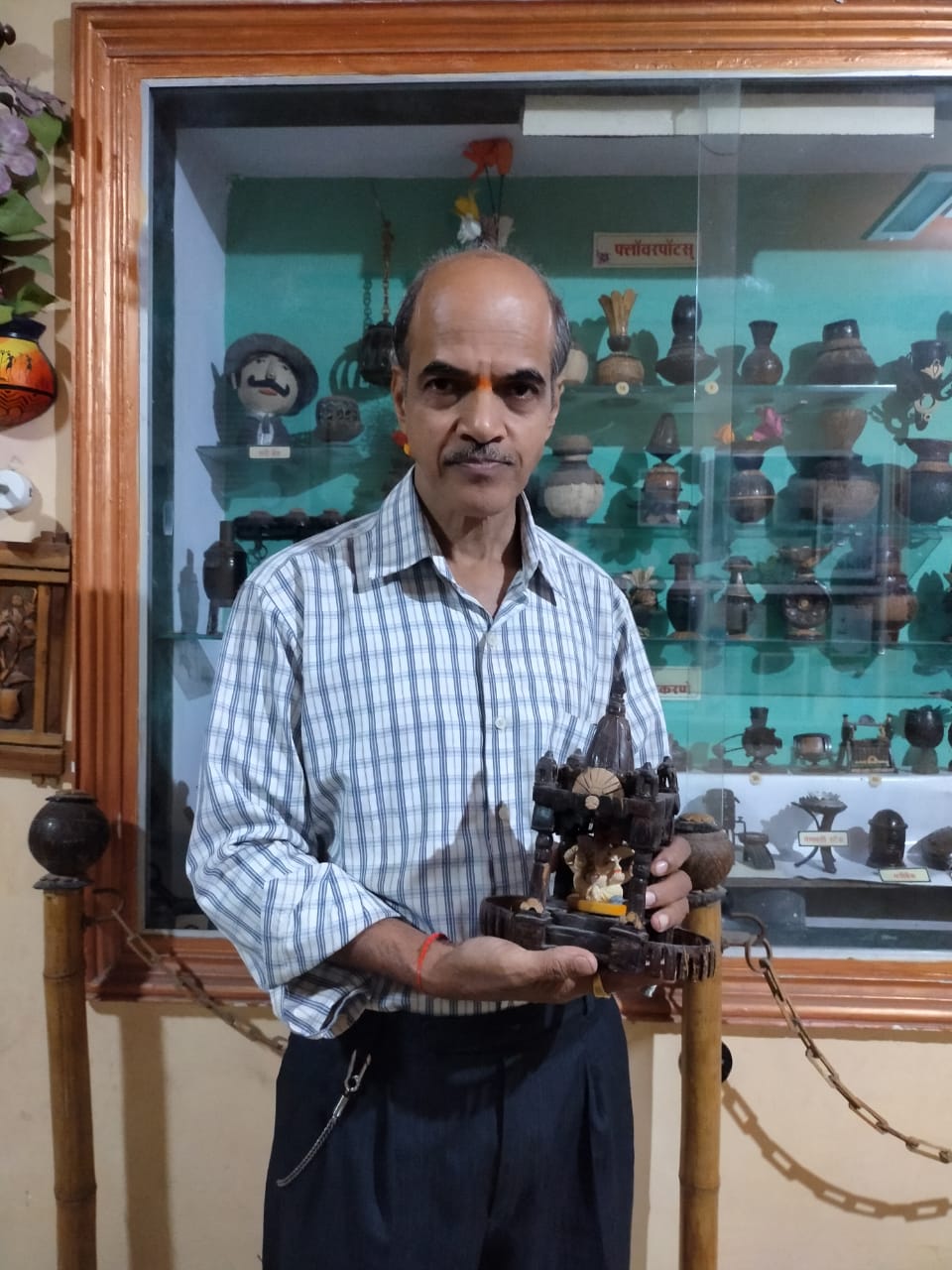 “Alibaug is a Konkan area and has thousands of coconut trees. You will find used coconut shells in abundance at the dump yard. Choosing coconuts as my main raw material not only saves me money, but it’s also eco-friendly,” Vijaynand says.

Though an artist at heart, Vijaynand also works at a fertiliser company and teaches yoga in his free time.

Inspired by one of his artist-friends, Vijaynand tried his hands at carving a small lotus out of a coconut shell. This one-hour experiment served as a trigger to what would one day be a full-fledged art gallery.

He made a few pieces and kept it at his house. At first, his family was more than happy to have showpieces around that added beauty to their home. But then, when he refused to stop, they became concerned. “A few months later, I had some 35 pieces lying around the house and there was no space to keep them. Naturally, my wife was upset with all the mess. So, I dumped everything in our first-floor room. That room sort of became my ‘art house’. A year later, I threw open the gallery for visitors,” he recalls.

Since every piece is hand-made, Vijayanand spends days at end to perfect it. The process begins with collecting coconuts from his friends’ farms. Some neighbours also readily keep their waste coconuts outside his doorstep.

He spends nearly a day observing the shape of the coconut shell, “Others may see just a round or oval shape, but I try to see an artefact in it. For instance, there was a weirdly shaped coconut with a lot of husk on it. The top was rectangular and the bottom had two small circles. So that took the shape of a miniature car,” he says.

Once he finishes capturing the outcome in his mind, the coconut is cleaned, cut, ground and glued together. All his artefacts are detailed to perfection, due to the intricate patterns on the object.

He has compartmentalised all the objects in his room. One corner boasts of vehicles like a tractor, car, auto-rickshaw, cycle and bike. Another dedicated space is for idols of Ganesha and Krishna, temples, and other elements one may find at a religious place. Parrots, crocodiles and cockroaches are also part of his collection.

When asked why he doesn’t sell the pieces, Vijayanand says, “You can’t keep a price on my objects, they are invaluable. The moment I commercialise them, they will lose their charm. I have a full-time job that takes care of our financial needs. So, there is no reason for me to sell.”

That being said, Vijayanand does not shy away from hosting school children and adults interested in learning the process. He keeps spare coconuts just for visitors and gives them demos. At times, he even encourages them to try carving.

Here are a few pictures from Vijayanand’s marvellous repository: 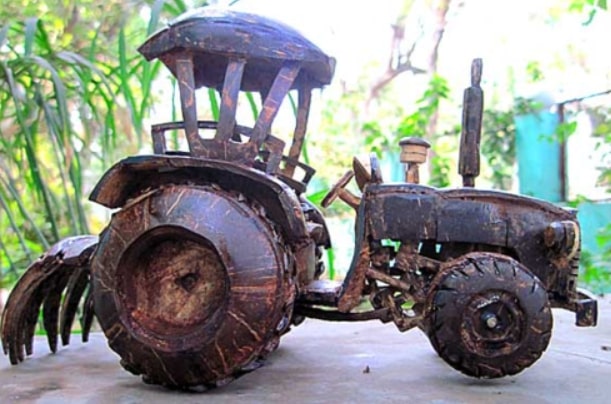 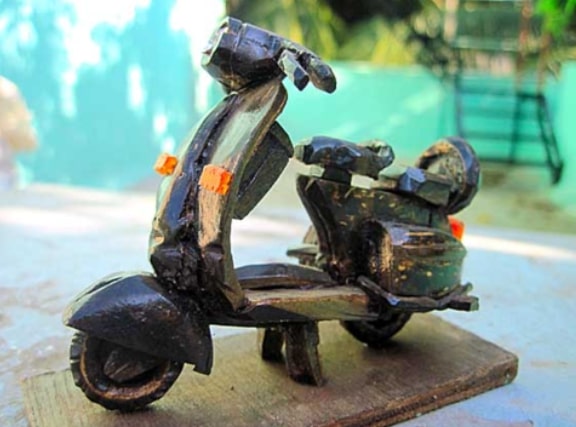 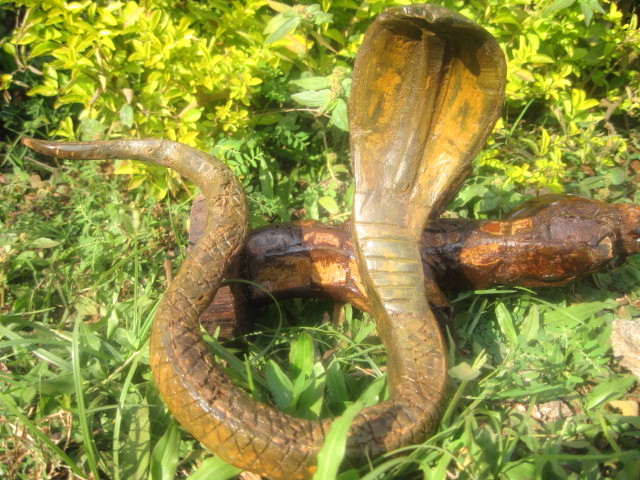 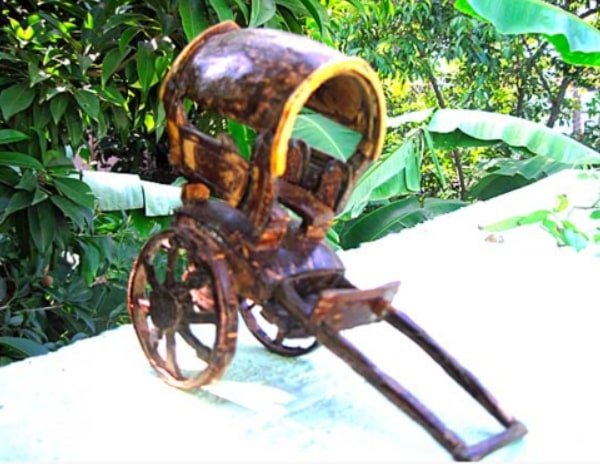 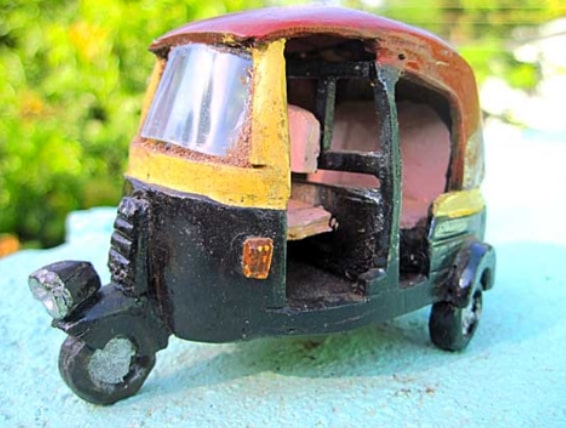 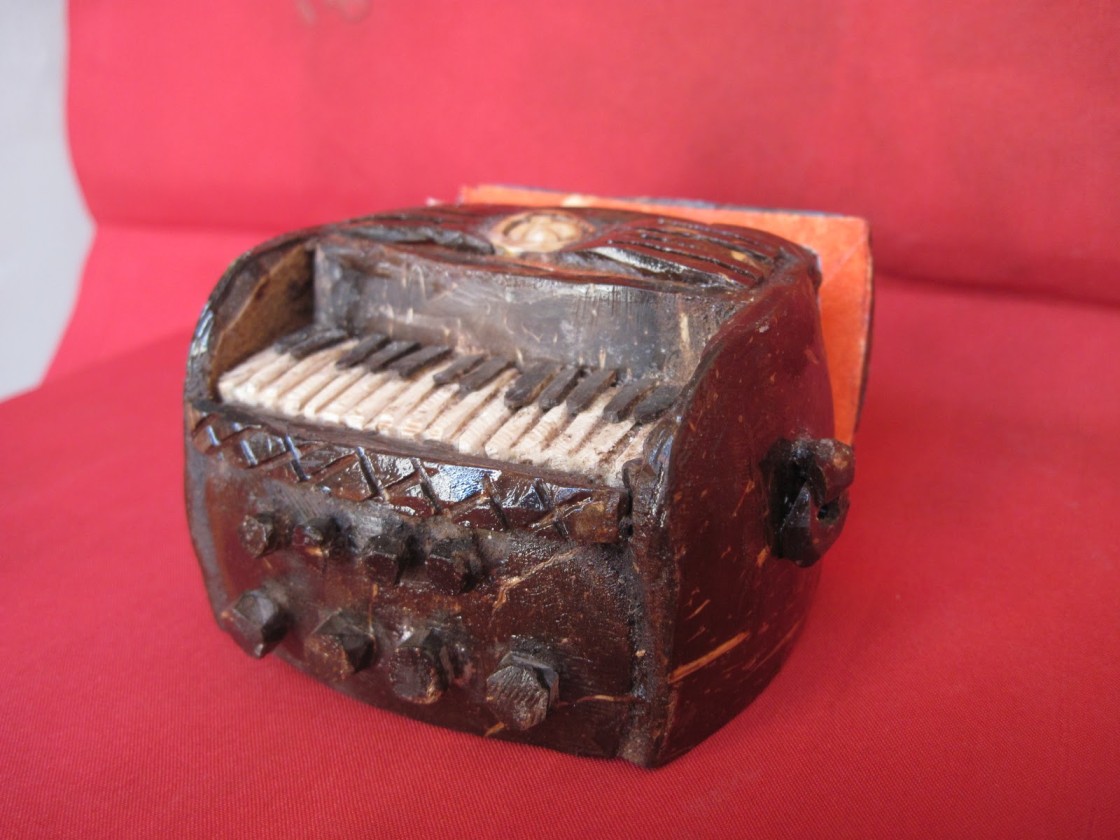 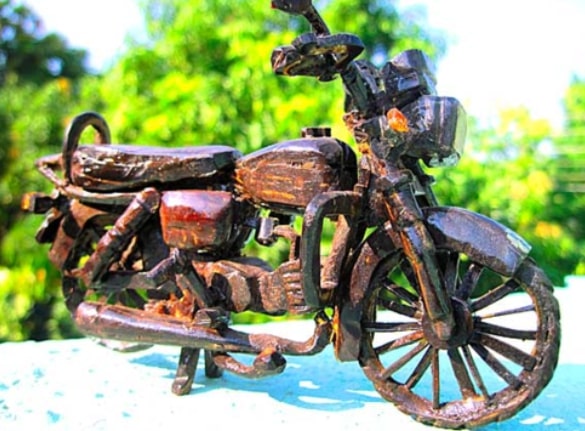 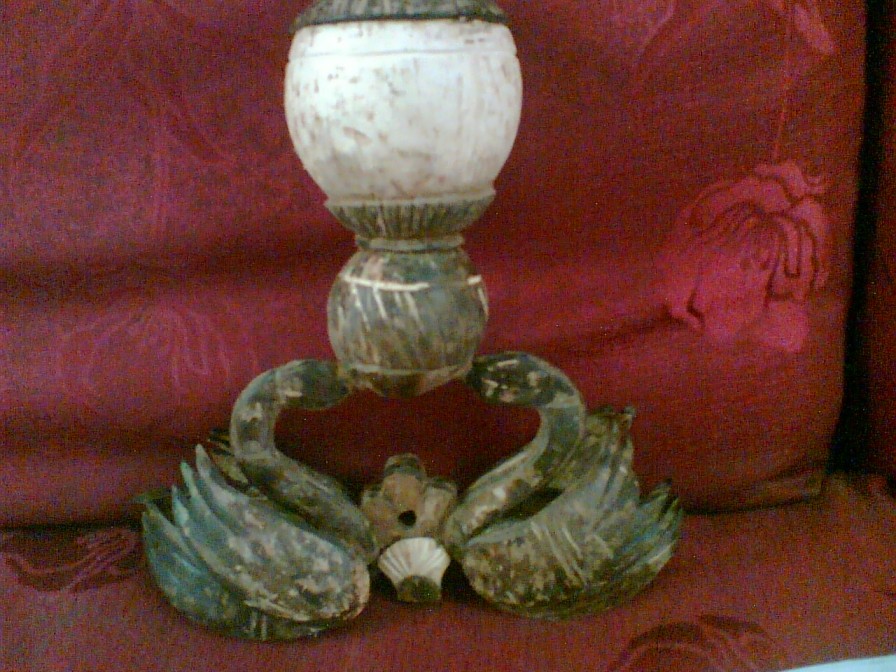 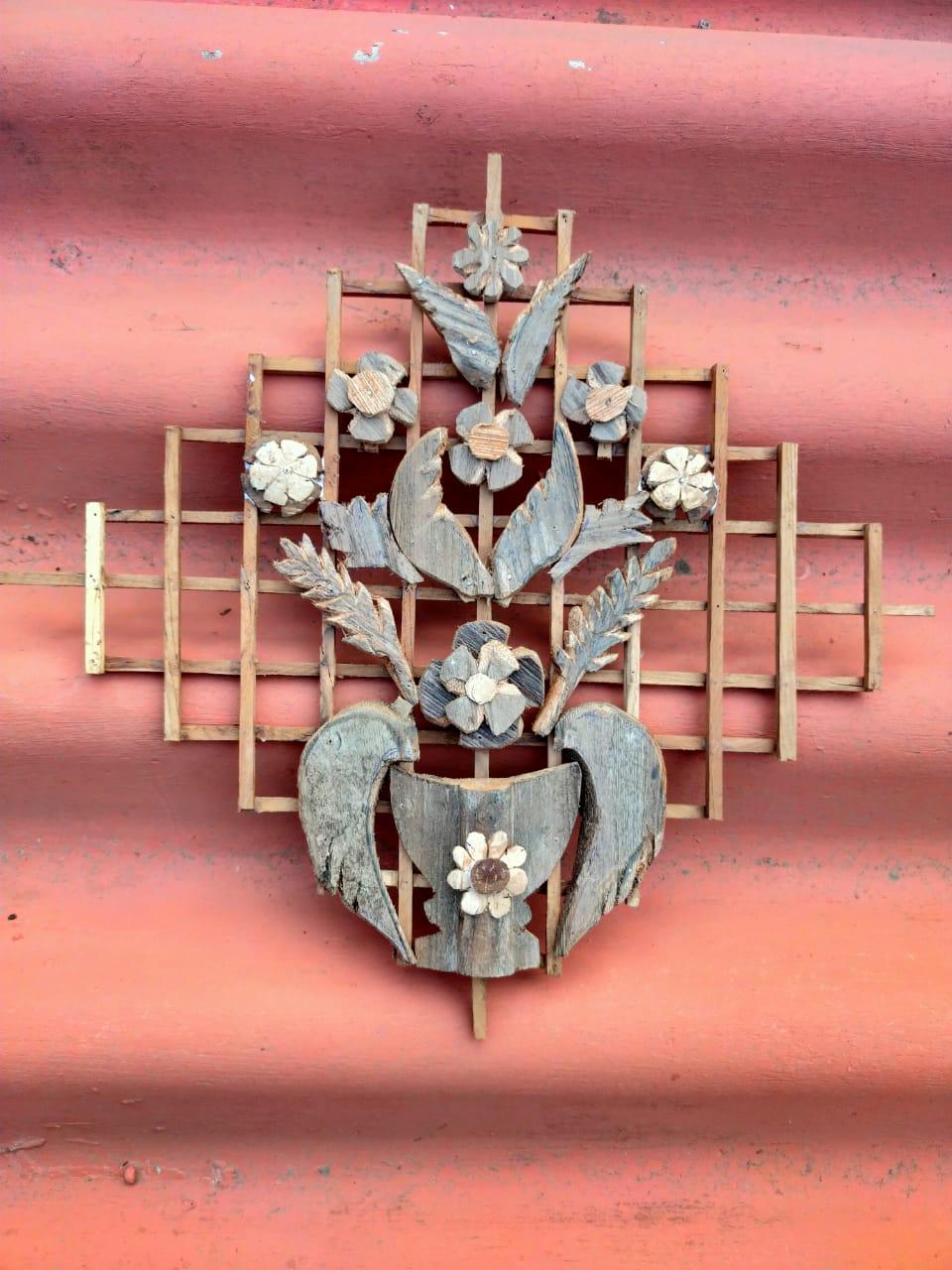 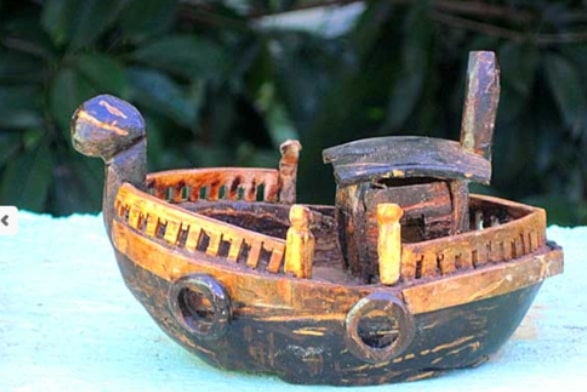 All images are sourced from Vijayanand Shembekar