There are many ways to enjoy retirement. Some take trips around the world, others spend time pursuing their hobbies but in Kerala’s Kannur district, a retired school teacher is doing his part for the environment by showing others how to cultivate vegetables in a more eco-friendly manner through trays.

Why no Plastic Trays

“Plastic trays are generally used to germinate seeds in nurseries and houses. Once the saplings are replanted, the plastic trays are discarded. I was disturbed to see plastic trays strewn about on roads and other places. That is how I began to make eco-friendly plant trays at home,” KV Sasidharan tells The Better India.

In the last two months, he made over 100 organic plant trays with plantain leaves. He says these trays can be also made by palm leaves.

The 61-year-old says that using these trays can save time, cost and effort. “I have germinated seeds of different vegetables including okra, cucumber, brinjal, chilli, ash gourd, tomato, and snake gourd in plantain leaf trays at home. Within five days, the seeds began to germinate and then I planted the seedlings in soil with the organic trays. I would also recommend coconut husk as a better alternative to plastic trays,” adds the teacher.

He adds that in palm leaf trays, people can germinate cashews and rubber as well. He says, “As the availability of palm leaves are lesser, I make more trays from plantain leaves.”

Speaking of his beautiful vegetable garden at home, Sasidharan says, “I get vegetables like tomato, chilli, eggplant, cucumber and many more from my garden. I don’t waste the remaining vegetables. I sell them in a nearby shop and get over Rs 1,000 for my produce.”

“Many have contacted me asking if my eco-friendly trays are for sale. I haven’t made any plans to sell them,” says Sasidharan.

Once a Teacher, Always a Teacher: 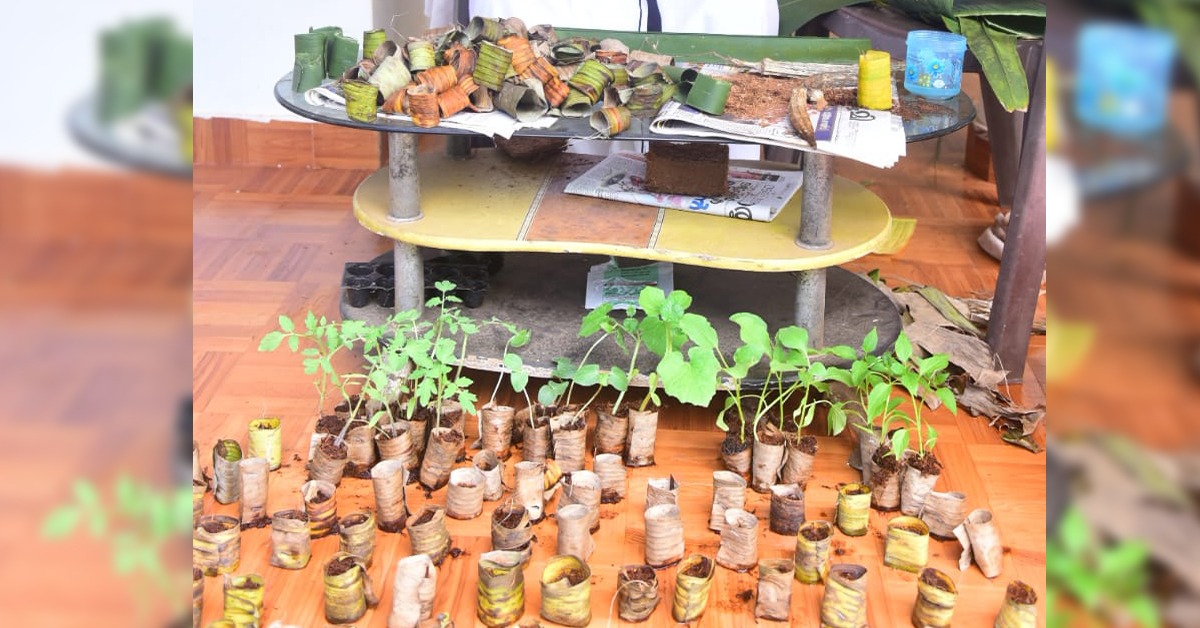 Though he used to teach social sciences, maths and science at school, he shares that he always made subjects interesting with crafts and experiments. The recipient of the National and State Award to Teachers adds that students “learn quickly if the subjects are made interesting through crafts”.

Today, he says Sasidharan will happily teach you how to make the eco-friendly plant trays and the things required for it such as a plantain or palm leaf, scissors, stapler, coconut husk or soil.

“Once the leaf is rolled, join the ends using a stapler. Then fill the rolled leaf with soil or coconut husk. And you may germinate seeds,” says Sasidharan.

After retirement, he was also making students aware of environmental protection and why they shouldn’t use drugs through special classes.

He adds, “I get around Rs 1,500 for each class and I donate the money to patients who are suffering from cancer and kidney-related diseases.”