It often takes a while for most of us to discover our true calling. But some are so certain about their chosen path that they pursue it with determination and attain fulfilment. Devesh Patel always knew that farming was his true calling. An IT graduate, he started expanding his farm practice in 2005 while he was still in college.

“Farming was my passion, but I took up the degree because my family believed that I should have some kind of degree,” laughs the 37-year-old farmer from Boriavi village in Anand, Gujarat.

He began operations for his brand of organic produce, Satva Organic, in 2005. Moreover, he did value-additions for fresh harvests like turmeric and ginger and started manufacturing products like turmeric pickle, turmeric latte, dehydrated ginger powder, chai masala, among others.

Now, he sells 27 products under Satva Organic, with close to 15,000 orders a month. Every year, he exports close to six tonnes of ginger and turmeric (fresh and processed) to the US and other countries in Europe. Through his operations, he earns over Rs 1.52 crores a year!

He has also trained over 200 farmers in the region and helped them practice organic farming, some of whom have gone on to become entrepreneurs. The enterprising farmer from Gujarat shares how he made the most from his organic farming practice.

How I Became a Farmer-Entrepreneur

Growing up in a family of farmers, Devesh was always connected to nature. His family owns about 12 acres of land, and he has taken an additional five acres on lease from family and friends. Although they had been practising farming for quite some time, it was only in 1992 that the family switched to organic farming.

“We believe that our land is our mother. So if this is our mother, why should we poison it? There are so many organisms carrying out different bio-activities underneath. Plus, it is our social responsibility as farmers to ensure that people eat fresh and chemical-free food. This was the idea behind pursuing organic farming,” explains Devesh.

Although the operations began full swing in 2005, the name ‘Satva Organic’ first came into use by the farmer in 1998. “When we would sell our organic harvests in the mandis, we used this name on the gunny bags which had our farm produce,” recalls Devesh.

Sometime in 2005, as Devesh was pursuing his Computer Science degree from Anand Mercantile College of Science, Management & Computer Technology, he started thinking about the farm operations since he would soon take on the reins after graduating.

“Our harvest was organic, but it fetched the same price as non-organic ones in the mandis. It made me realise that I would have to grade my produce and explore other market channels,” states Devesh.

He noticed a few banquet halls near his college and had a lightbulb moment.

“A lot of rotary clubs, society meetings, and functions would take place in these halls. It got me thinking about selling the produce from my farm to them directly. It would eliminate the middlemen and their added costs, the people would get organic produce at a lower rate, and I would also earn a higher price,” says Devesh.

And, this is what he exactly did.

He spoke directly to the presidents of different clubs, and built up his customer base, supplying them with freshly milled organic atta and vegetables. After a point, he started getting orders from individual homes and delivered those in the mornings on his way to college. 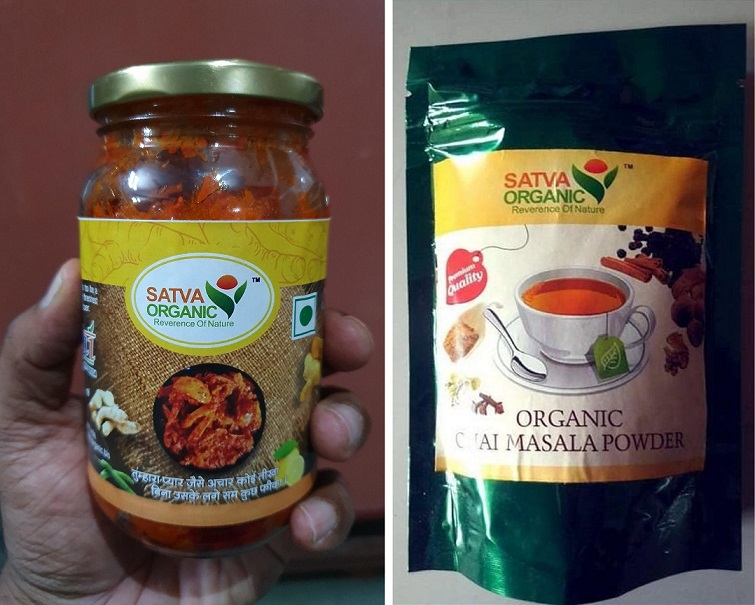 This led to the growth of Satva Organics, with the operations growing each year.

Devesh informs that the operations for Satva Organics are very much like family-run businesses where everyone multitasks and looks after different aspects like farming, marketing, processing, and value-adding.

They practise bio-dynamic farming, where the soil is enriched with nutrients even before the seed is sown. Further, they grow plants that fix essential nutrients to the soil and enrich it by using organic manure.

“We have a small dairy farm as well, and we use it to make the farmyard manure. This is prepared by fermenting cow dung and adding buttermilk, anti-fungal powder (natural) and organic liquid bio bacteria produced by the local agricultural university. We also have large pits on the farm where we make compost by sandwiching layers of kitchen waste and dry leaves,” he explains.

But the decision to process and add value to his fresh harvest helped him become an entrepreneur and increase his income. A 1,200 sq ft processing unit on his farm washes, peels, boils, dries and processes potatoes, wheat, maize, turmeric and ginger. These are made into potato chips, flours, popcorn, and spice mixes. Devesh mentions that the operations in the unit are supervised by his wife, Darpan Patel.

“The weather conditions in our region are most suitable for growing tubers. Which is why we mostly grow produce like yam, potatoes, turmeric, ginger, sweet potatoes, beetroot, along with brinjals, wheat, and coriander,” explains Devesh.

All products sold by Satva Organic are certified by FSSAI, India Organic, and USDA.

Customers are extremely happy with the quality and freshness of the produce. Amisha Patel is a homemaker in Ahmedabad who discovered Satva Organic at an organic agricultural fair about six years ago.

“My family has been eating organic food for quite some time, and when I visited the fair, I came across their stall. I decided to try their haldi (turmeric) powder and loved it for its freshness. I could tell that no chemicals were used to grow them,” shares the 42-year-old.

Since then, she has used their spice blends, chai mixes, and some vegetables.

“During the lockdown, they could not supply us with the produce. So, I went all the way to the farm and got some potatoes, ginger, pudina, haldi and coriander,” smiles Amisha.

Farmers too have benefitted with Devesh training. Ritesh Harshadbhai Patel is one such farmer who was directed to Devesh by the Anand Agricultural Institute. Trained as an engineer, he decided to take over the farming operations on his 6-acre family-owned land when his father passed away eight years ago.

“We were growing tobacco at the time, and I decided to stop it because it is cancerous. I switched to chillies, but they weren’t growing well. That is when I thought of taking up organic farming. Devesh bhai has taught me everything I know,” he says.

Now, Ritesh is an organic farmer who grows moong, turmeric, and wheat. He also has a processing unit where the turmeric is processed (dried and powdered) and sold under his brand, ‘Harshprem Organics’.

“Devesh bhai sometimes instructed me over a video call, and I followed his directions. I am thankful to him because my income from farming has increased three times. I am also sharing the knowledge I gained on organic farming with other farmers here,” shares the dweller of Dharmaj village in Petlad taluka.

If you were to ask about challenges, Devesh happily says that there were none that he couldn’t overcome over time.

“Right now, the only challenge for us is to increase our land under farming as there is a lot of demand within India and outside. By scaling our agricultural operations, we will be able to cater to the rising demands,” he shares.

In future, Devesh hopes to work with and train many farmers. “The idea is to show them that organic farming can be profitable,” he says. He also looks forward to introducing more value-added products to his existing range.

“There is a need to create awareness on organic farming, and I hope to share my knowledge with anyone who wishes to learn. As a farmer, my life-long goal is to provide consumers with healthy food grown using the best practices,” he says, signing off.