In 1942, when thousands of Indians were writing a glorious chapter in India’s freedom struggle through the civil disobedience movement, four friends in Bombay (now Mumbai) were setting up a paints manufacturing company in a tiny garage.

The idea was born after the British placed a temporary ban on importing paints, which left the country with very limited options — it was either Shalimar Paints or expensive foreign brands. So, Champaklal Choksey, Chimanlal Choksi, Suryakant Dani, and Arvind Vakil decided to enter a less explored territory and translate their ambitions into reality with ‘Asian Oil and Paint Company Private Limited’.

Today, this 78-year-old company with a random name that was derived from a telephone directory, has captured a 53 per cent market share in India and is Asia’s third-largest paint company. It is known as Asian Paints and operates in 16 countries, across the world.

The ‘Har Ghar Kuch Kehta Kehta Hai’ catchphrase (that has a strong nostalgic appeal) reiterates their philosophy of providing thousands of colour shades, themes, textures and patterns to its entire customer range, from middle-class households, corporates and even NGOs. There is paint for all kinds of budgets and the website even selects a suitable paint according to a user’s budget.

Here’s an insight into the spectacular journey of Asian Paints.

How A Company with Pre-1947 Roots Dominates the Market

There is an unwritten rule that aspiring entrepreneurs and startups diligently aim to follow — to make inroads in every corner possible with their product or service. Many old-school companies also believe that the success of a product is defined when there is no specific target audience so that it caters to every type of individual.

This strategy was a major reason behind Asian Paints massive popularity three years later in 1945. That year, the company invented tiny paint packets as opposed to the giant tins to simplify and speed up the distribution process across the country. It tied up with small distributors in every corner.

Some would label the result as ‘passing with flying colours’ as the desi company had clocked a revenue of Rs 3.5 lakh in the same year with just five colour choices — black, white, red, blue and yellow. This strategy helped them pick a steady pace and by 1952, the annual turnover of Asian Paints was Rs 23 crore, a sum that was considered to be huge back in the day. 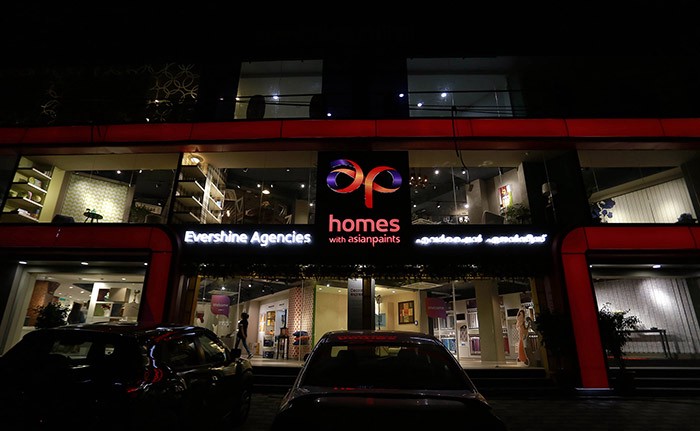 In 1954, the paint giant decided to go all out and initiate a marketing campaign that would reflect their philosophy. This strategy was also a way to ensure the existing customers remained loyal.

And thus was born the notorious kid with a paint bucket and brush in his hand, Gattu (a common nickname in north India) created by legendary illustrator, RK Laxman.

As per reports, Asian Paints had launched a contest inviting people to name the figure RK Laxman had created and the winner would get Rs 500. This was truly a masterstroke that served the dual purpose of igniting curiosity in people’s minds about this mysterious kid and letting them know that it was their revered cartoonist’s creation. Coincidently, of the 47,000 entries, two people from Bombay had sent ‘Gattu’ (a paint mascot equivalent of Nirma girl), that has now become a nostalgic figure for the kids growing up between the 50s-80s.

Gattu became the face of an affordable Tractor Distemper and generated a large audience in middle-class households. The tagline “Don’t lose your temper, use Tractor Distemper” changed people’s perspective that one does not need to wait for the peel to come off. It is a lifestyle choice.

Once again, the plan worked and the sales increased tenfold over the next four years. The rapid growth gave them their first plant in Bhandup.

Between 1957 and 1966, Asian Paints worked on building a more professional image by pocketing big clients like British firm, Balmer Lawrie. However, the turning point for the company came in 1967 when it emerged as India’s leading paints manufacturer ahead of any international competition, and a decade later, they established their first venture in Fiji.

There has been no looking back since.

Being consistent in quality but adapting to current market trends and developments is one of the biggest reasons for the company’s exponential growth.

Whether it was its first-ever TV commercial in 1984, a premium product in the early 90s or establishing call-centre operations and a website as early as 1998-99, Asian Paints has always stayed ahead of time by anticipating the future trends.  The company has also not shied away from exploiting social media fervour, and has millions of followers over Facebook, Twitter and YouTube combined.

In fact, innovative and socially relevant campaigns have always been a strong point for the company. Remember when Deepika Padukone highlighted the issue of indoor pollution and promoted the non-pollutant colour ‘ Royale Atmos’? It garnered a great deal of attention and reestablished the trust in the company paints that are safe for everyone.

Another reason that contributes to its impressive strides is how they are unafraid to enter related segments. For example, over the years, they have made inroads into other segments in the same industry like interior and exterior wall finishes, wood finishes and enamel finishes and industrial paintings. Bath fittings and kitchen are other noteworthy mentions.

Needless to say, accolades and recognitions followed. In 2004, Asian Paints made it to the list of Forbes Best Under a Billion companies in the world and was even conferred With ‘Sword of Honour’ By the British Safety Council.

Of the few companies that began before independence, Asian Paints has managed to stay relevant to this day. Not just that, it has also become one of the most sought-after companies across the world.