Did you know that India’s Public Distribution System feeds 10 per cent of the world’s population?

The government of India runs 5,37,000 Fair Price Shops. This is the largest food distribution network in the world, spread across 3.3 million sq km serving 80.74 Crore people.

How does this vast and complex system work? 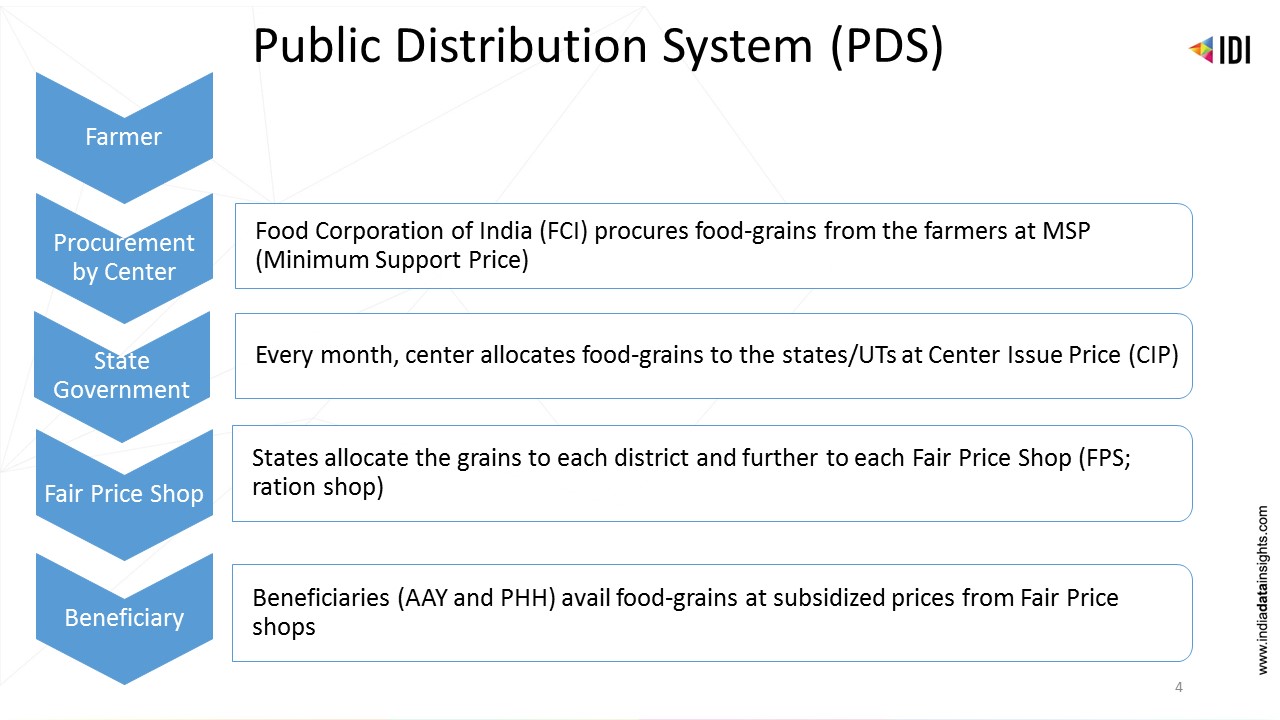 The National Food Security Act (NFSA) came into effect on 5 July 2013. It marked a paradigm shift to food security from welfare to a rights-based approach by legally entitling a large portion of the population to receive subsidised grains.

According to the Act, 75 per cent of rural and 50 per cent of the urban population (overall two-thirds of the total population at the national level) is to be covered by Public Distribution System under two categories: 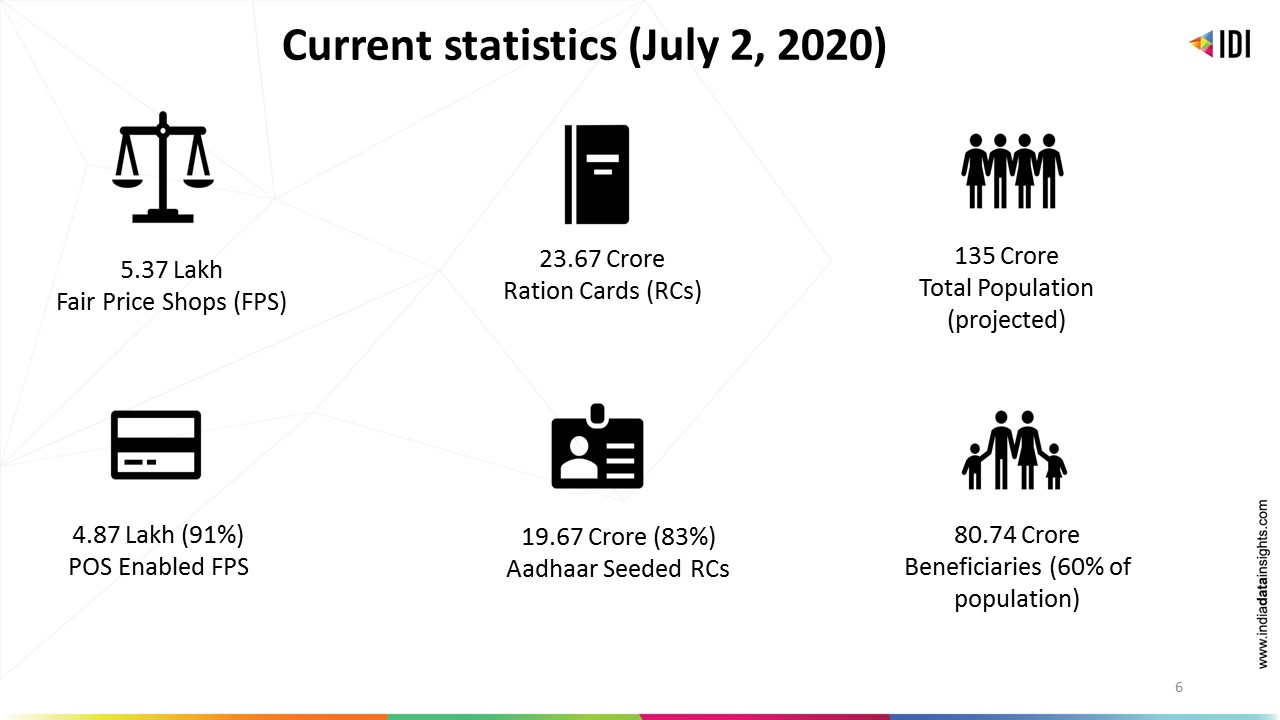 The state-wise coverage of population is determined by the Planning Commission (now NITI Aayog) based on the 2011-12 Household Consumption Expenditure Survey of NSSO. This survey is used to identify the percentage of the population below the poverty line. State targets are set, taking into account the portion of their populations below the poverty line. The actual coverage refers to the number of ration card holders. This is where we stand on target vs actual coverage: 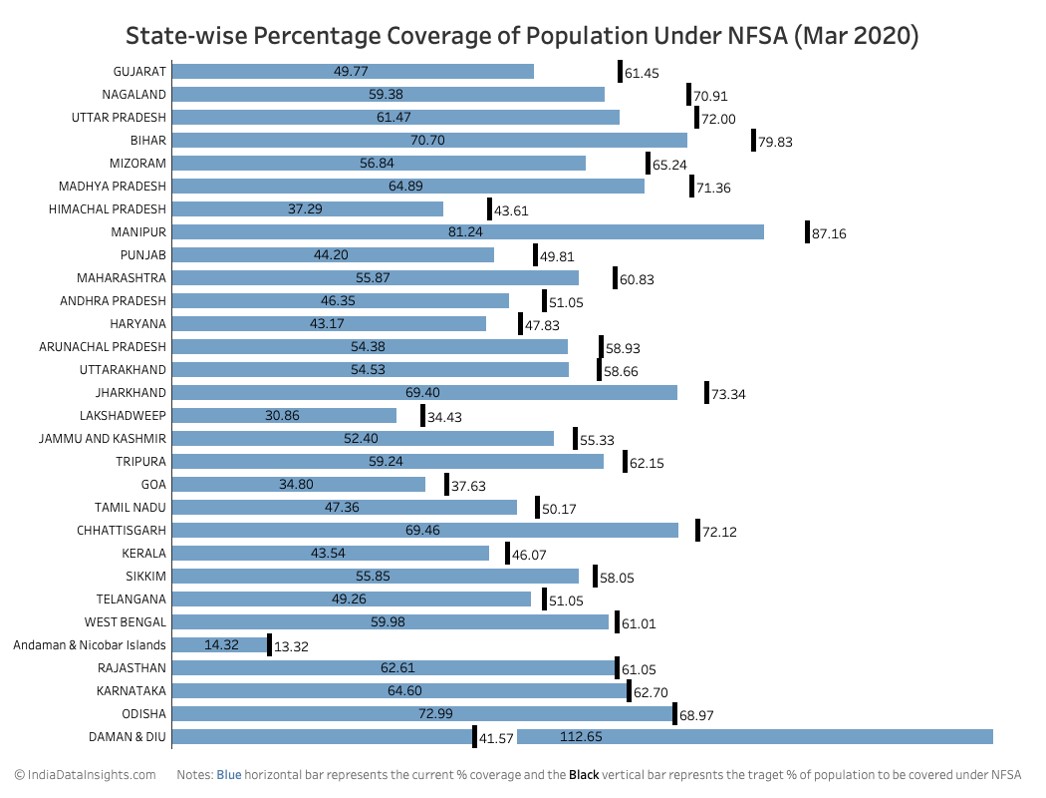 Some of the large states short on their coverage are :

Some lag remains, but we are making progress in the right direction — the number of beneficiaries increased from 56 Crore in 2017 to above 80 Crore in 2020, with eight crore new ration cards issued.

In the same period, the automation of Fair Price Shops increased significantly with over 90 per cent of them equipped with ePoS (Electronic Point of Sale system). Around 93 per cent of the grain distribution is through this system, and the dominant mode of authentication is Aadhaar at 70 per cent.

With better efficiency, transparency and accountability brought in the system by automation, the quantity of food grains distributed per card per month has gone up significantly. In contrast, there has been some rationalisation on the number of beneficiaries per card. Earlier issues of duplicate and bogus cards, obsolete information of card-holders (deceased/newly-born) have been solved to a large extent through the Aadhaar-based authentication.

How did this distribution network perform during the COVID-19 lockdown? 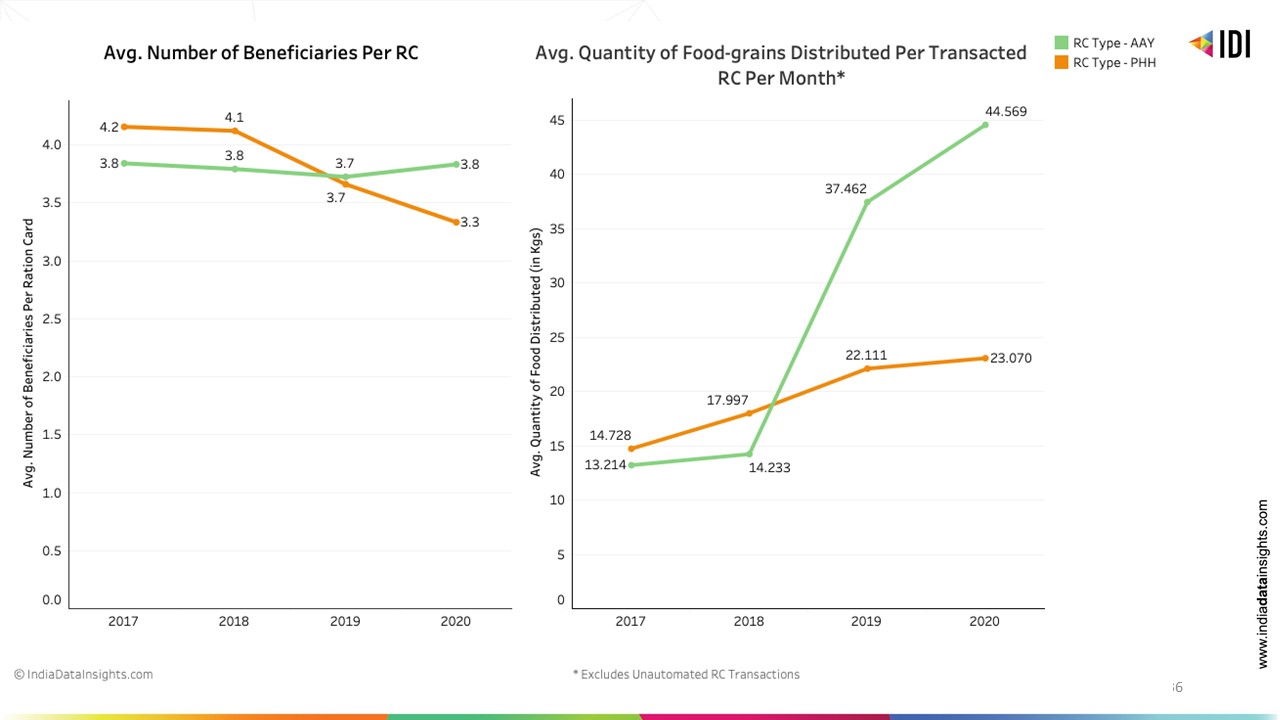 In March ‘20, the Government of India announced additional free food supplies for two-thirds of the population as part of its effort to mitigate the impact of the COVID-19 lockdown. The Pradhan Mantri Garib Kalyan Anna Yojana (PMGKAY) was to support families from April-June using the existing network of Fair Price Shops with the additional provision of 5 kg food-grain plus 1 kg pulses per month.

The latest government data shows that 91 per cent of the quantity allotted by the Centre was procured and lifted by the states, and transported via a record number of railways rakes and trucks. Of the procured quantity, 84 per cent has already reached the intended beneficiaries via the fair price shops.

Most large states managed to distribute over 60 per cent of the allocated food grains, with some exceptions — Punjab, Madhya Pradesh, West Bengal, and Tamil Nadu — lagging. With the scheme being extended to November ’20 as per the recent announcement, there will be time for these states to catch up and fill the distribution gap. 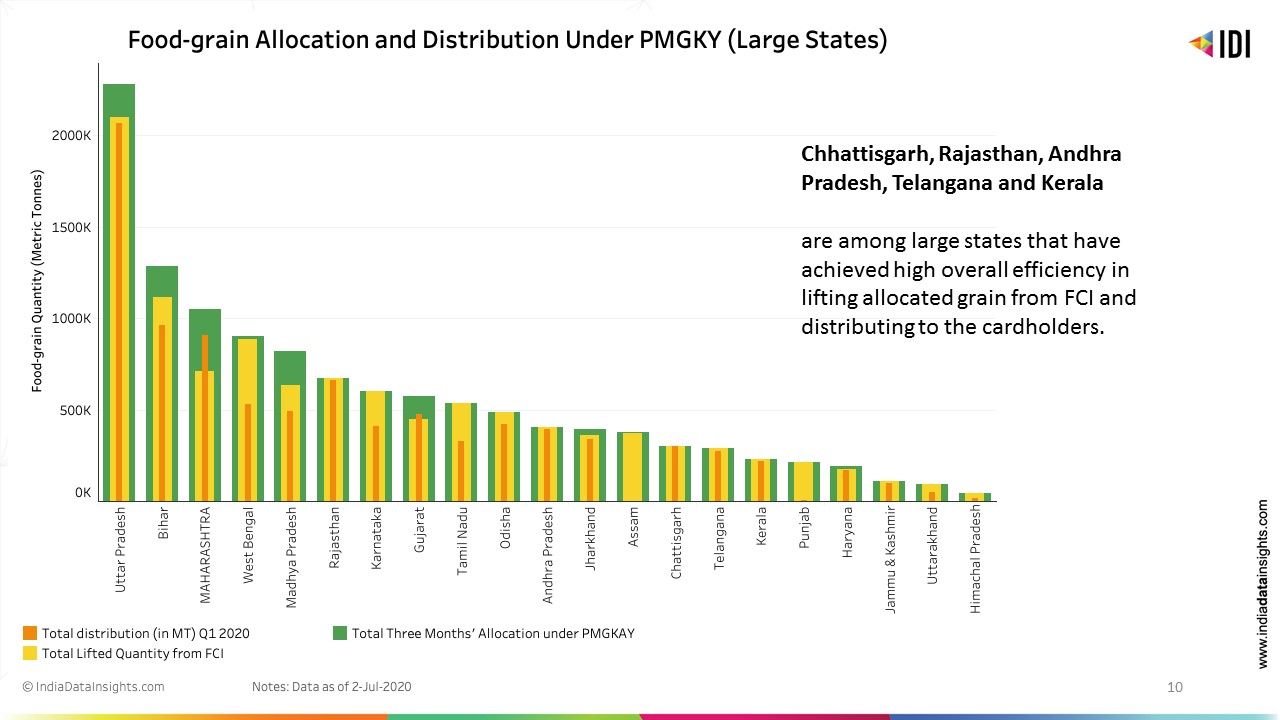 Having an extensive network of Fair Price Shops (there’s a shop per 6 sq km in India) and the digital infrastructure by way of ePos and Aadhaar-based authentication, food grains reached every corner of the country within weeks and were distributed. In the absence of a robust and responsive infrastructure, no quick relief measures could have been implemented.

Even during a long and uncertain COVID-19 lockdown, this infrastructure was silently working to transport the grain to each of those 5.3 lakh shops from Kupwara to Kanyakumari and Kutch to Mon.

In addition to the infrastructure, we have enough stocks in the godowns and enough crops in the fields to provide food security.

What needs immediate attention now is: 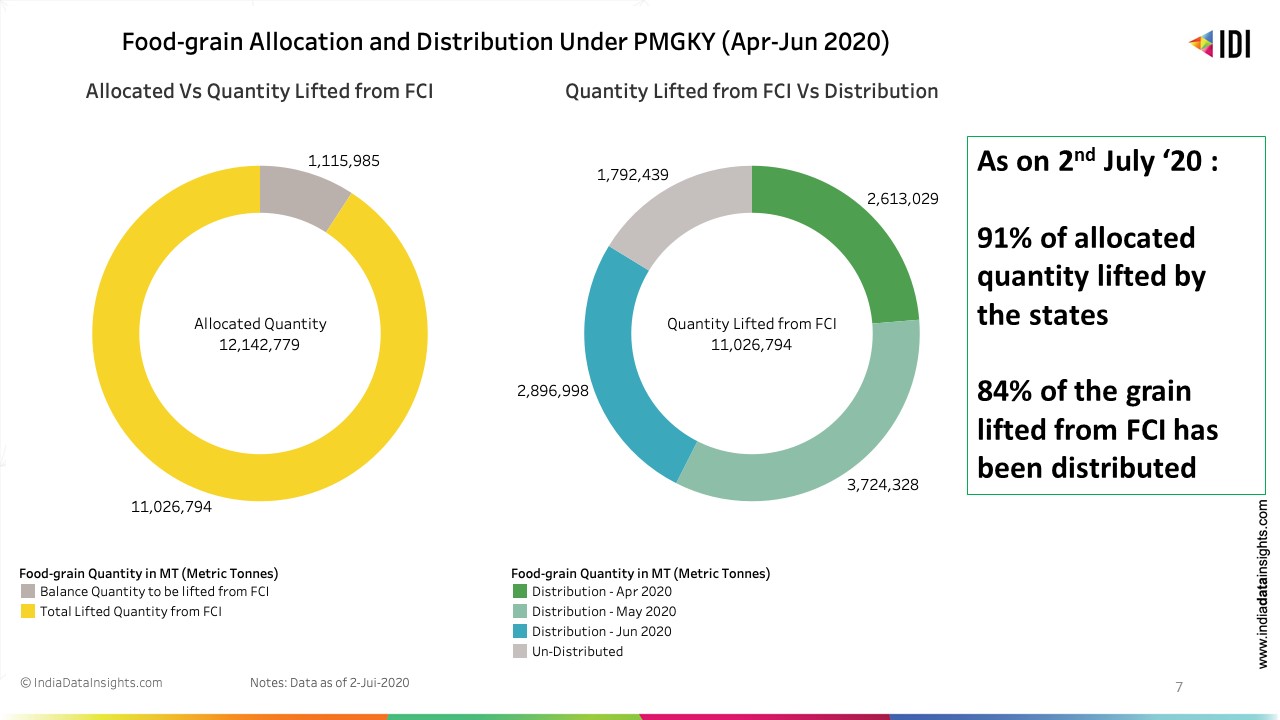 If we fix these issues, we provide lifelong benefits of better daily nutrition to 10 per cent of the world’s population. It’s a problem worth solving!