When 68-year-old Vishnu Shankar Ingavale from Satara developed sudden chest pain, doctors recommended a surgery that would cost Rs 2,50,000. Being a labourer with an annual income of just Rs 36,000, he refused the operation and assured his family that home remedies would improve his health. But the reality was far from it. He spent days looking for money lenders that would not charge hefty interest rates. Just as he was running out of options, his friend told him about government schemes he can avail with the help of Haqdarshak.

Vishnu took his chances and approached the social enterprise, which helped him avail the Mahatma Jyotiba Phule Jan Arogya Yojan. Under this scheme, yellow ration cardholders like Vishnu get financial assistance for their treatment and medicines. In less than a week, he received 2,60,000 in his bank account and underwent the surgery.

Meanwhile, 47 farmers in Kapadwanj, a quaint town in Gujarat, are improving the health of their farmlands thanks to the I-Farmer Cow scheme. Under this scheme, the state government transfers Rs 900 to each farmer’s bank account to promote organic farming.

For years, these farmers had been using harmful chemicals to grow food, which not only affected their health, but also compromised crop quality. Undoing years of conditioning that crops will not grow without pesticides happened only after the intervention of Haqdarshak.

Both cases mirror the on-ground reality of government schemes in India, where beneficiaries are most likely unaware of the benefits. A gentle push and effective guidance can do wonders, as they did for Vishnu and the Kapadwanj farmers.

Applying for government schemes without proper documents or knowledge can be tedious and tricky. It is only when pertinent questions like “Are people aware of the scheme?”, “Do they have the means to access it?” “Are people eligible for it?” are answered can these schemes be considered viable.

This is where Haqdarshak, a Pune-based social enterprise, steps in. The four-year-old organisation was started by Aniket Deoghar to facilitate welfare schemes for a cross-section of the country’s population to target multiple problems citizens face.

So far, it has helped over three lakh citizens across different genders and age groups access government benefits worth Rs 500 crore. The organisation has an extensive list of eligible schemes that cover areas like education, housing, health, employment and small businesses, as well as the recently included COVID-19 related benefits. 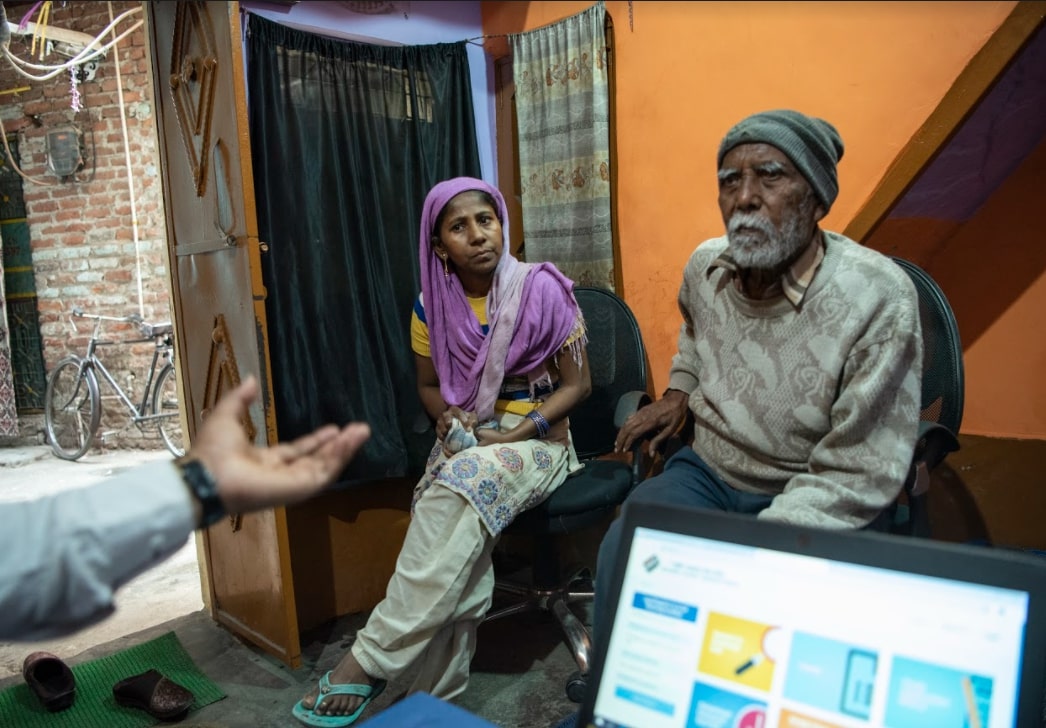 The organisation functions on a socially viable and trustworthy model comprising community leaders who go door-to-door to help beneficiaries with filing and paperwork.

Local women from every region are trained with digital literacy and how to identify beneficiaries. Having someone from their own community makes them approachable. In return, these volunteers called ‘Haqdarshaks’ charge a nominal fee, thus generating a livelihood for themselves.

Aniket was never keen on pursuing an MBA or working in the banking sector, even while studying Commerce at Lady Sriram College. Originally from Shimla, he was always fascinated with public policy and how the system worked.

To gain in-depth understanding of the sector, Aniket joined Teach for India as a fellow in 2010. Post that, he joined multiple organisations and worked in rural Maharashtra till 2014.

“While working at grassroots levels, I realised the huge gap in implementation of government schemes. We have a plethora of schemes for people from every section of the society but they often don’t reach the bottom of the pyramid,” he says.

From 2014 to 2016, Aniket focussed on research and development and envisioned an enterprise that would provide information to people in the remotest parts of India. But soon, he realised people were struggling with application and paperwork. 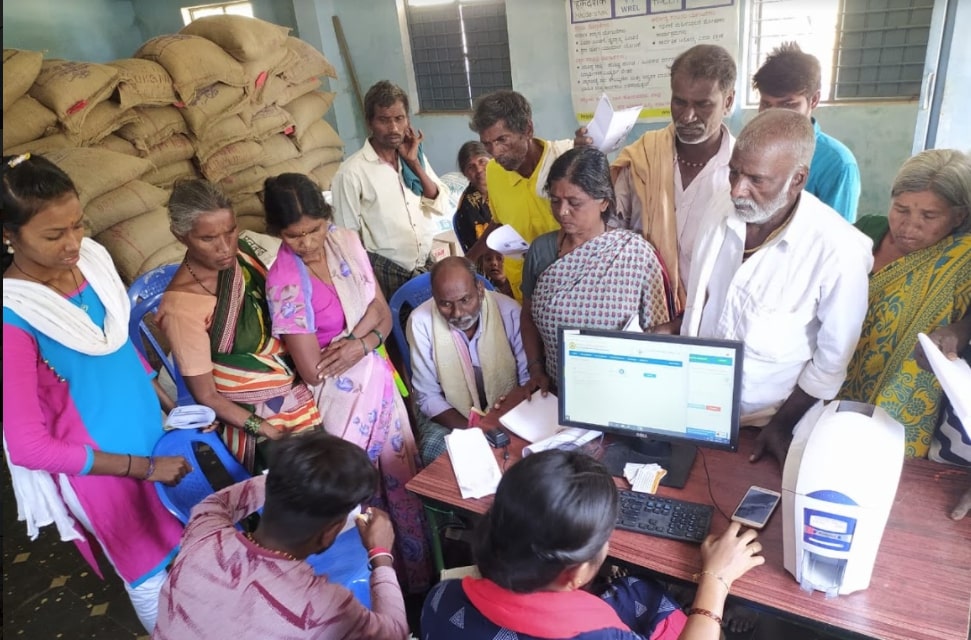 This led to the development of Haqdarshak, a mobile application and website where people can apply in a hassle-free manner. Next, he decided to identify representatives in every village who would help people.

To scale his model, Aniket got P R Ganapathy, the then chief operating officer of social enterprise incubator Villgro, who helped raise money and provided his expertise to refine the model.

To ensure that Haqdarshak has a sustainable model, it partners with governments, corporates and philanthropists to carry out training programmes and also help their employees avail benefits. For example, one of their first tie-ups was with Godrej Properties. They helped nearly 10,000 construction workers at Godrej avail benefits under the Building and Other Construction Workers (BOCW) Act. The workers can claim BOCW cess paid by the realty to the state government.

Likewise, they partnered with organisations like Tata Trusts, Yes Foundation, JSW Foundation and Save The Children and governments of Rajasthan, Madhya Pradesh and Jharkhand.

Zeba Khan, a resident of Madhya Pradesh’s Dasipur village did not have a PAN Card or Aadhar card till she became a Haqdarshak in 2018. She was amazed to find that with a couple of documents, she could access several benefits, from cooking gas to financing her children’s education.

When representatives of Haqdarshak announced a job opportunity that would also benefit the village in a community meeting, Zeba jumped at it. She underwent training and started her first job ever.

In the last two years, she has made PAN Cards for 800 people and given gas connections to 100 families. At present, she is helping 25 retired people with their monthly pensions. At a nominal fee of Rs 50-100, the 29-year-old does everything, from spreading awareness, application to arranging documents and following up with government offices.

Her monthly income ranges anywhere between Rs 3,000 to 6,000, depending on the schemes.  With the savings, she has purchased a laptop, photocopy machine, printer and started her own Common Service Centre recently.

“This job is liberating for someone like me who has no exposure to the outside world. At the end of the day, I feel proud to have helped a fellow villager and also bring some money home. My knowledge of government schemes and experience has given me the confidence to walk up in a government office and fight for my clients’ rights,” Zeba tells The Better India.

Just like Zeba, close to 3,500 women entrepreneurs across India are becoming financially independent and helping their community get benefits outlined for them.

Mirza Baig, a trainer at Haqdarshak, highlights the gender upliftment that has occurred due to this model.

“Along with our partners, we identify women from marginal backgrounds who are willing to become a Haqdarshak. In my experience, every woman I have trained has formed her own identity now. This is not just about earning money but also unleashing their potential. Some of my trainees have gone on to become sarpanches,” he says.

As for beneficiaries, there has been a 186 per cent jump in the number of applications in the Financial Year 2019-2020, as compared to the first year, “In the first year we were doing 5,000 applications per month and now, we are at 70,000. Our final goal is to reach at least one lakh per month,” says Aniket.

Even after establishing a successful model, Aniket and his team of 200 people have to face challenges daily. There are many, including improper documents, discontinuation of schemes, change in policies, insufficient data from the government and ensuring a steady cash flow. But these difficulties have not deterred Aniket from scaling his work and creating a real on-ground impact.

Get in touch with Haqdarshak here