If I had huge aspirations but a small outdoor space, the one thing I would build to guarantee the biggest return on investment would be an herb spiral. Herb spirals are beautiful, productive, righteous installations — popular in permaculture circles, but little known in mainstream garden design. I think of my herb spiral as a one-stop culinary trip around the world. Its many microclimates allow me to grow native and exotic herbs fundamental to many ethnic cuisines, and all within a very small footprint. In a space crunch, there is no reason why dwarf tomatoes, lettuces, radishes, beets and other vegetables couldn’t be planted among the herbs. I planted surplus romaine and buttercrunch in my spiral, and it thrived.

My spiral is about 7ft wide (2 metres) and 1 metre (3+ feet) tall. If the circle were flat, the plantable area would be about 38.5 square feet, but because the winding 14″-18″ wide bed is linear, running up at an incline to the centre top of the circle in a spiral pattern, there is a gain not just in real estate area, but in opportunity. From a bird’s eye view, an herb spiral looks very much like a snail or nautilus shell, shapes that are based on what is known as nature’s sacred geometry. Sacred geometry reflects the universe, its pure forms and the relationship between nature and man, the parts and the whole. While spirals in nature tend to follow the golden ratio, also knows as the Golden Ratio (Phi) or the Fibonacci Sequence in their rates of expansion, my herb spiral claims no such accuracy. Like all permaculture installations and systems, we mimic nature’s logic but we cannot match her accuracy or precision. 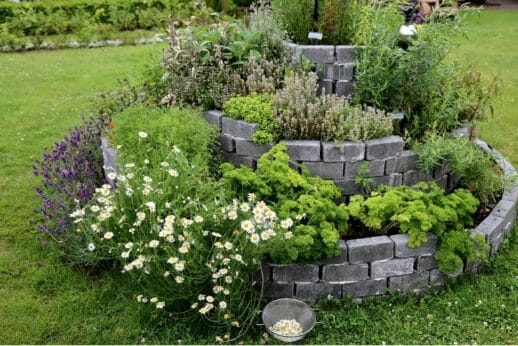 Permaculture co-found Bill Mollison formalized the design and construction of herb spirals, but it it was likely not his original idea. There is no ‘absolute’ right way to build an herb spiral, though Mollison’s recommended size and proportions do work almost magically for me. I do very little to maintain the plants in my spiral, yet they are so prolific that very many harvests are required over the season. I hang great bundles of herbs from the kitchen library to dry, for use in culinary and medicinal applications, and I share them with neighbours.

The premise behind an herb spiral is to create diverse growing environments for culinary and medicinal herbs at various elevations, utilizing various soil/drainage conditions, and various exposures to sun, shade, wind, frost, etc., and to utilize gentle slopes and bulk soil to slow down the natural movement of water, leaving just enough of it where it is needed, to maintain ideal growing conditions. With a little planning and patience, you can grow and harvest everything from angelica to watercress, and maintain a small bog or pond at ground level, on the deep shade side of the installation. I opted for a bog pseudo-creekbed like area, because we live on the edge of a temperate rainforest, and a pond would only attract raptors, racoons and coyotes. 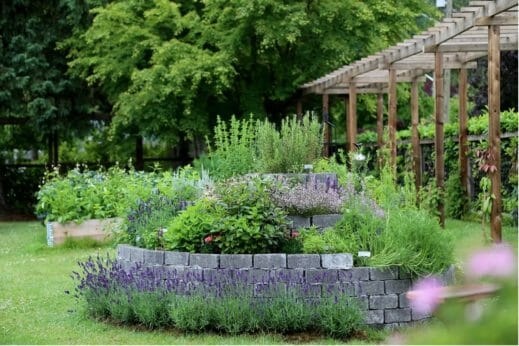 Authentic permaculture herb spirals utilize stones and small logs found on site, and/or perhaps recycled bottles, broken cement, or found materials. In planning my front yard situated herb spiral, I had to consider neighborhood culture, decades old community design considerations, and also my neighbours (views and happiness). I built the spiral using traditional principles and scale, but with materials that were more sympathetic to established building and landscape architecture. Tumbled grey concrete bricks, diverted from another building site were put to good use in my garden and fit in nicely with the old bones of our 72 year-old home. I used mis-matched century-old red brick left over from a garden edging project, to fortify the hidden centre column of the structure, and to reduce the amount of higher-quality brick that I would need to commit overall. 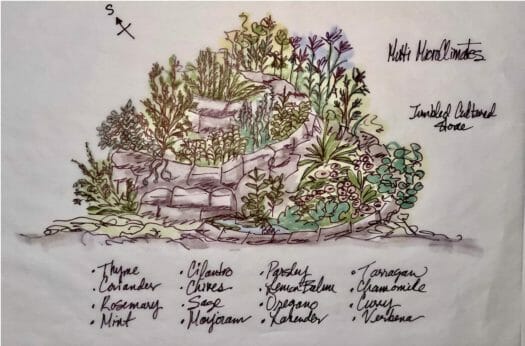 I did use some mortar, but very little, and only to ‘glue’ the horizontal surface of the bricks to one another. I left the vertical seams open for drainage, for migration of insects and tiny creatures, and to accelerate the growth of moss. The chore of removing moss from the driveway pavers over the winter, will become an efficient forage for the spiral. I plan to fill most of the vertical seams with moss, which should help the spiral retain water, and add an element of age, rather quickly.

Ideally and typically, herb spiral are built within permaculture zone one, within 10 feet of the kitchen door. This makes sense of course, as you will likely want to run out while cooking, for a snip of this or that herb. We moved into our home 20 years ago, and there was nothing but patio outside our kitchen doors. The back lawn was committed to swings and a small playing field, plus it is rather shady where the mossy grass is. Out front however, we get full sun almost all day throughout the summer, and we had plenty of room for an herb spiral. The fact that it would be 150ft or so from the kitchen door (permaculture zone two or three, typically), didn’t deter me. I love it so much, I am happy to make the trip out, rain or shine. Urban permaculture is after all, about adapting and re-imagining, doing your best to follow rural permaculture principles and ethics in imperfect conditions, and celebrating small victories. 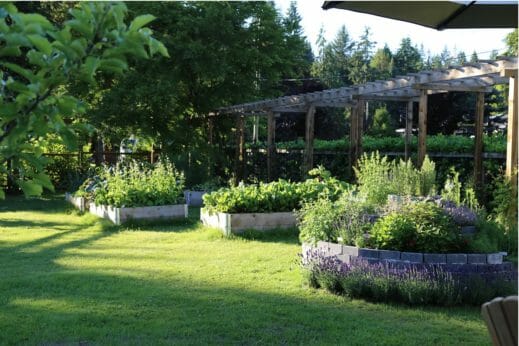 My front yard herb spiral is far from my kitchen door but I’m happy to make the trip, visiting beds en-route
I started my build on bare lawn that had been ravaged by chafer beetles, and dug-up by raccoons. Using a string and bamboo compass of sorts to delineate the circle, I dug up and composted the sod. I laid about six inches of round drainage rock (not split gravel as it fits together tightly which is counter-intuitive for drainage), and leveled it out to grade-more-or-less. If you live in an area where ants are common, using sand as a base may send your spiral tilting and sinking in short order. After dampening the gravel, I laid a two-inch wide strip of thick sand-based mortar on which to lay my first course of damp bricks (damp, bricks stick together much better than dry), adjusting accordingly to fit whole bricks only. I then laid two consecutive layers, alternating the seams in a traditional brick pattern.

I let the bricks set for about an hour, and then used trial and error, creativity, and simple intuition to dry-stack design the spiral, ensuring that the bottom end of the ‘spiral’ ended on the north bottom side of the structure, where excess water would spill out in the boggy area. You could quite easily look at the structure I built, and create one of your own in a similar fashion, or elongate it perhaps into an oval. Once I was satisfied with my dry-stack, I deconstructed it, created a plan on paper, counting bricks and noting steps and orientation, then broke the spiral down and began building in ernest. I used lengths of 1×10 left over from building the garden beds plus two long levels, to ensure that I didn’t go off kilter. It was fun and easy to build. 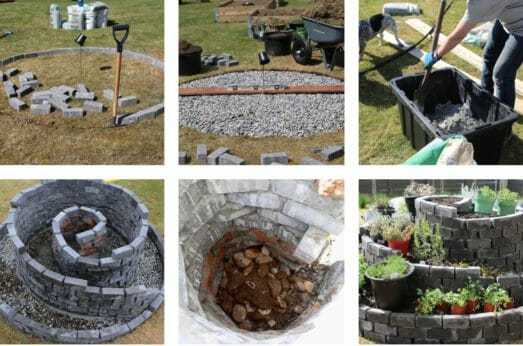 Once built, I added a good six inches of drain rock around the perimeter ‘beds’ and took advantage of the interior column, to get rid of some large rocks and broken bricks that has been sitting around getting in the way. I knew which herbs I wanted to plant, and I left them guide me in creating unique soil and drainage conditions as I worked my way around the spiral, from south to east, to north and back to south; from bottom to top, and from exterior edge to the centre. I kept in mind that the vertical spaces between the bricks would weep moisture from the centre outward and also down, and I knew too that the thermal mass of the bricks would collect, reflect, and retain solar energy during the day, feeding it gently back to surrounding plants at night.

I used only large and small rocks, and broken brick for drainage, and organic compost to fill. In some places, where I wanted to place plants like lavender that don’t like wet feet, I mixed organic compost and small round drain rocks 50/50. In front of the spiral, facing south, I created as 8″ high berm against the thermal mass of the brick, and planted sun-loving lavender to attract pollinators.

I moved many herbs from their pots on the sunny areas of the back patio, to the herb spiral, I grew others from seed, and I purchased some from a local nursery. Before committing to planting, I laid the pots where I thought the herbs would thrive, and set about filling in the blank spaces in between with herbs or pollinator attracting perennials like dwarf salvia, to suit. I built and planted the herb spiral in early May, and after just two months it was full and lush and looked as though it had been there for years. With all but the summer savory, the plants thrived. Summer savory is an annual, known to fade quickly and dislike wet spring weather, which we certainly experienced this year. 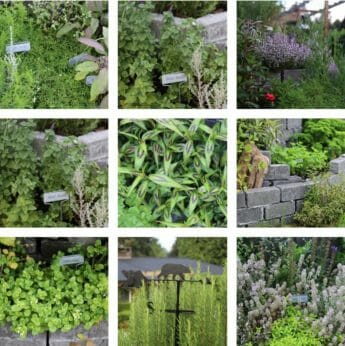 To avoid having the mint take over, I planted each variety in bottomless pots, and I keep an eye on runners. At the far bottom north of the spiral, a small watercress pond happily collects spillwater before it flows over ultimately, into a a grassy bog containing the highly medicinal herb, Labrador Tea. I don’t include basil in the spiral because it is quite fragile, prone to burning and wilting, but primarily because I companion plant a huge amount of it with my tomatoes – enough for a winter’s worth of frozen pesto.

Just a few weeks ago, I harvested the last of the tarragon for vinegar, cut a final dozen or so bouquets of mint, lemon balm, oregano, and savory for drying, and harvested about half a bushel of rosemary destined for the dehydrator. I covered the rosemary and Vietnamese coriander stubble with a few inches of compost and then mulched it with clean garden straw. I hope to keep harvesting the winter savory over the cold months, but still mulched its crown with straw, just to be safe. It’s hard to say whether or not the hardy perennial herbs will return in full glory next spring. It will depend on cold and thaw cycles, the quality and measure of wind coming down from the snowy mountains, and the amount of snow (wet snow in particular), that nature sends us. I’ve done what I could and will hope for the best.

My big idea is to create a half-size herb spiral on wheels, to use around back, so that I can indeed have fresh herbs within 10ft of my kitchen door. I have one long cold winter to sketch it out and dream it up!