A boundless white desert, acres and acres of arid land, a low-lying area where temperatures touch 50° Celsius and scattered monsoons — this pretty much sums up Gujarat’s Kutch district. But, in this very region of saline backwaters and unfavourable vegetation conditions, lies a lush farm spread over 150 acres. Blooming with orchards of fruits like dragon fruit, mangoes, pomegranate and hundreds of vegetables, it breaks the monotony of Kutch’s landscape.

The farm is owned by Haresh Thacker, a third-generation farmer, who started farming after passing out of school, and he sells the vegetation under the name Ashapura Agro Fruits, which is a business that he started along with his late brother, Jethalal.

“It was a combination of occupational genes and the joy of seeing a seed bloom into a fruit that ignited my interest in farming. I was around 14 when I first started helping my father with basic activities like watering, and every day, I would wait for school to end so that I could enter the fields to check the progress of my favourite trees. The joy of plucking fruits and vegetables was something I wanted to do for life. After schooling, I joined my father and promised myself that one day I would create a farming empire in the drylands of Gujarat,” Haresh tells The Better India.

Along with witnessing the gradual expansion of his farm, he also noticed the invariable problem of water scarcity. Realising that climatic conditions cannot be altered, Haresh focussed on incorporating technologies and innovations that would require limited water.

Building relations with other competitors was not difficult when he started out, he says. “When you are in your 20’s, you are brimming with enthusiasm, energy and will. I was always looking forward to exchanging knowledge with other farmers. Also, I kept myself aware of all the farming schemes of the government. So, in pre-social media days, I heavily relied upon my own marketing skills.”

The 53-year-old’s marketing strategies introduced him to farming techniques that can now be found on his farm. “Who would have imagined that mangoes, which are tropical fruits and need up to 100 litres of water per day would flourish in water-scarce Kutch? Or that dragon fruit can survive in freezing temperatures and sweltering heat? But I did it!” he mentions.

How? “I use a Vietnam-based farming technique to grow dragon fruit and high-density fruit tree planting for mangoes,” mentions Haresh.

In 2012, Haresh was one of the farmers who travelled to Vietnam as part of an Indian delegation, and was intrigued by the strange-looking dragon fruit, or Hylocereus undatus, which was pink on the outside, and had white skin peppered with black seeds inside.

“The dragon fruit is a tropical plant that is low on calorie content and contains antioxidants. It does not require much water to grow and can thrive in arid areas. The fascination resulted in experiments and today we grow dragon fruits in 50 acres,” shares Haresh.

Haresh has planted 98 poles per acre and each pole gives around four dragon fruit plants in a year, “In the first year it gives around five kilos of fruit per pole and it can go up to 20 kilos in the fifth year.”

Haresh has even given a desi name, ‘kamalam’ (the Sanskrit word for lotus) to the dragon fruit that fetches him Rs 100 per kilo, “The shape of the dragon fruit is very similar to a lotus, hence the name kamalam,” he says. 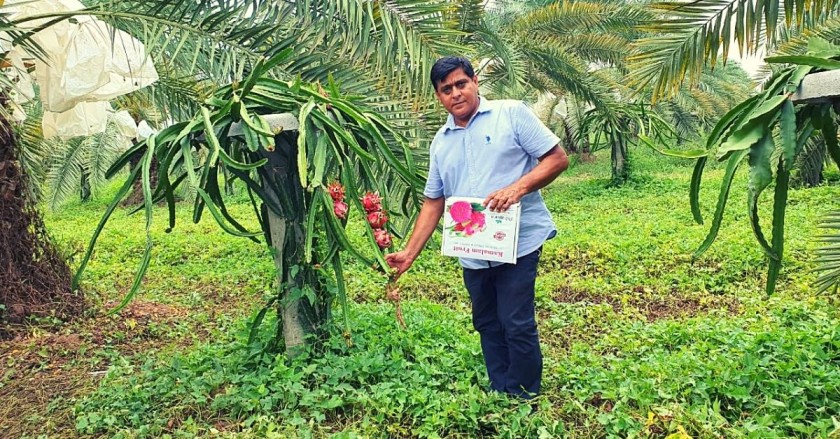 He had invested four lakhs to grow the dragon fruits and the costs were recovered within two years, “If you do not put enough investment then your execution can fail. Today, I earn anything between Rs 6-10 lakhs per cycle,” Haresh adds.

Seeing his phenomenal success, over 150 farmers from the district and across India have visited Haresh’s farm to learn the techniques and start their own cultivation.

One such farmer is Vinay Prajap who moved to Bhuj from Uttar Pradesh four years ago for the job of an agronomist. However, when that did not turn out to be suitable, he switched to dragon fruit farming.

“I purchased four acres of land after undergoing training at Haresh’s farm. He has added his own variations in the Vietnam method to make farming easier and more organic. I replicated that on my farm and one acre fetches me around Rs 80,000,” he tells The Better India. 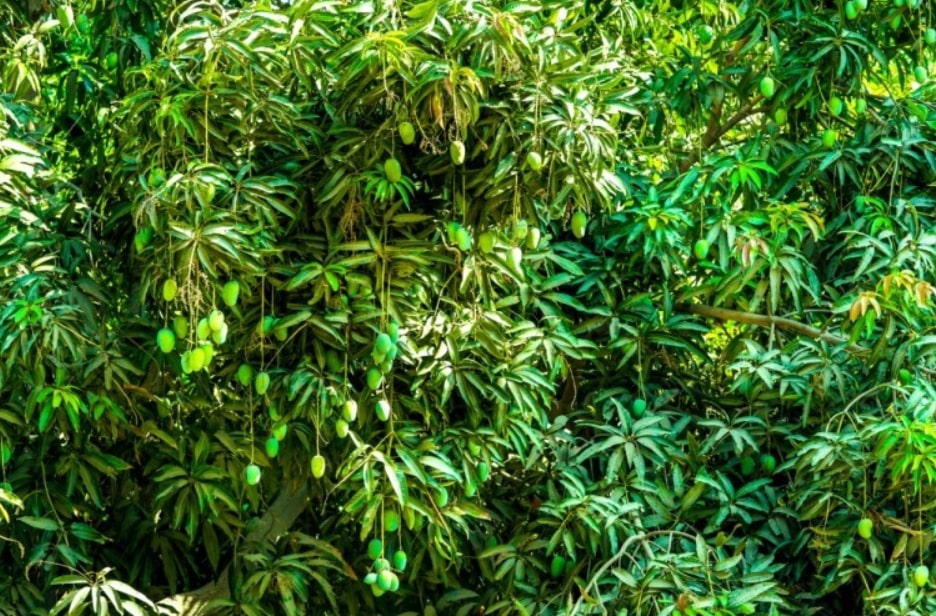 While mangoes have been a part of his farms for a few decades now, Haresh implemented high-density planting (HDP) only a couple of years ago.

Under HDP, the aim is to increase plant population per unit area, reduce the gestation period to get early returns and thereby increase yield. This method is beneficial for trees like mangoes that have a huge plant canopy occupying wider spaces.

“We plant mangoes at a spacing of 10×10 metres, allow them to grow till 8 ft and then keep pruning them. Since the trees are kept at a short height, it allows better light interception leading to high photosynthesis. This has increased yield, from 50 trees per acre to 400. We get a revenue of up to three lakhs per acre,” says Haresh, who grows the Kesar variety on a shared land of 200 acres between the brothers.

The productivity of the orchard is inversely proportional to water usage, “Irrigation is crucial after pruning and for the same, we use drip irrigation that ensures effective water management. It can cut down water usage by almost 40-50 per cent.”

Mangoes and dragon fruits are grown organically as Haresh uses Jeevamrutham, neem, vermicompost to supply essential nutrients to the trees and kill pests.

For the rest of the vegetables and fruits, Haresh constantly experiments with different farming techniques like intercropping and multi-layer farming.

Currently, he is growing off-season strawberries and broccoli through the fan and pad technology. The system consists of exhaust fans at one end of the greenhouse and an AC cooler at the other end to control the climate and make it conducive for plants.

He has also recently installed an automated drip irrigation system across his farm that allows him to monitor water levels of each plant from his phone: “The system switches off in two hours automatically after covering the entire farm.”

Haresh supplies his vegetation across India, including to big players like Reliance Fresh and Big Bazaar. He also exports the fruits to Dubai and the United Kingdom.

When asked what is the secret behind the exponential growth and high profits, Haresh says, “I grow fruits and vegetables as per the market demand. For instance, lemons are in high demand during summers, while bananas are in high demand in the fasting season between July and August. Understand the market requirement and let your farming business flourish.”

Get in touch with Haresh here.