Krishna Mawasi belongs to the Mawasi tribe of Madhya Pradesh. She donated her entire produce so that her fellow villagers don’t die from starvation.

46-year-old Krishna lives in the Keljhora village of Majhgawan block in the Satna district. The livelihood of this extremely backward tribe is dependent on forest products and small-scale farming.

However, the tribe has been reeling under the impact of reduced rainfall and the subsequent lack of irrigation facilities, compelling them to migrate for work. Such is the economic condition of the village that a majority of the children in Keljhora suffer from malnutrition.

Usually, this is the time of the year when the migrant Mawasi men return to their villages to collect forest produce like Mahua, Tendu and Chironji – their primary source of income. Due to the lockdown, they had no buyers this year, and thus, went through a terrible financial crisis.

But for the first time this year, Krishna grew vegetables under a community malnutrition management project. It is run by Vikas Samvad, a partner organisation of Child Rights and You (CRY) in villages of Majhgawan block of Satna district. Under this programme, people like Krishna are provided with seeds and assistance to farm in their backyard. Developing a kitchen garden is one of the ways to curb malnutrition rather than solely depending on government aid.

But, at the blink of an eye, she donated her entire produce to the women of her village, just so that the children didn’t go hungry! 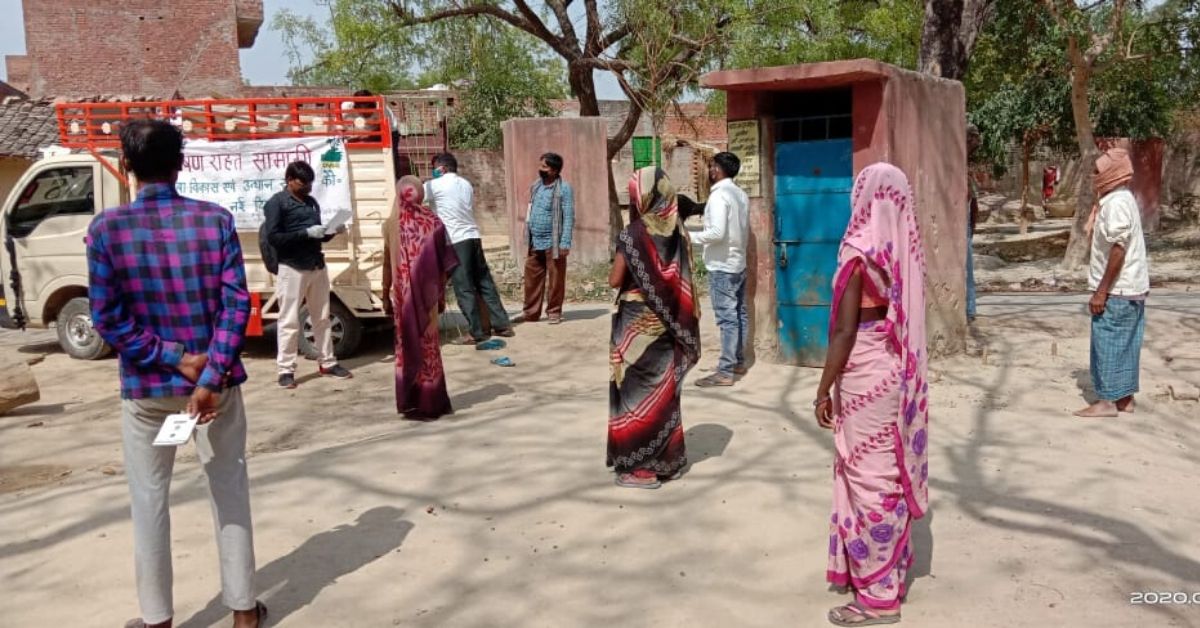 Krishna says, “I got associated with the kitchen garden project last year with the motive of serving nutritious food to my children. After cultivating vegetables in small quantities last year, I decided to grow them on a slightly bigger scale this year with the hope of selling a portion of production. But the pandemic shattered all my plans and left the entire village in dearth of food. This compelled me to help other villagers, especially elderly persons and pregnant and lactating mothers. So I decided to distribute vegetables grown in my backyard.”

With the announcement of the nationwide lockdown to prevent the spread of the COVID-19 pandemic, came fear and panic, and a mad rush among the privileged to hoard groceries and eatables. Despite regular assurances that stores selling essentials would be exempted from the lockdown, many households proceeded towards panic buying.

On the other hand, print, online and social media were full of distressing news and images of people who lost their jobs and those who embarked on a long journey home on foot due to unavailability of transport.

One can well imagine the condition of families that could not walk home. Three such families from Bihar were working on a road construction site in Khoranv, Uttar Pradesh. But with the announcement of the lockdown, the contractor who brought them to Khoranv vanished. Neither did he meet the workers nor did he pay them their wages. With no other solution in mind, the children of the family were compelled to beg for food in the village.

It wasn’t that the situation in Khoranv, in the Kaushambi district was any better than that of the migrants. It was one of the villages identified by Doaba Vikas Evam Utthan Samiti (DVUS) in need of urgent relief and ration during the lockdown. DVUS is another project supported by CRY.

However, when Parvez Siddiqui and his team from DVUS reached Khoranv to distribute the ration, they were greeted with appeals like – “Sahab, humari jagah un Bihari mazduron ko ration de dijiye, unke bacche roz gaon me bheek maangne aate hain, hume bilkul accha nahi lagta, (Sir, instead of us, please give the ration to the migrant workers of Bihar stuck in our village… their children come to our village and beg for food, and it hurts to see them).”

“I was overwhelmed with the response of the villagers. My team is conducting ration distribution for more than a month now, and yet, we never witnessed such generosity. You have to see the condition of this village to know how much these people need the ration. Despite that, they decided to give it away to the migrant workers stuck in their village,” says Parvez, awestruck.

It takes a lot to overlook one’s own distress to extend a hand to another. Or maybe, it just takes a kind thought.

These stories reminded me of an oft-quoted saying of CRY’s late founder, Rippan Kapur, “What I can do, I must.”

I am sure these villagers, residing in the remotest parts of the country, have never heard of Rippan, but in these troubled times, they have embodied his spirit. And all I have felt since I have heard about them is that if every single person did whatever they could, we would have a wonderful and kind world for our children!