For most farmers in India, the presence of birds is a menace, but that’s not the case for Muthu Murugan from Coimbatore district’s Thondamuthur village.

The 62-year-old organic farmer is happy to share his farm’s produce with birds. For this, he has dedicated half an acre in his 4-acre plot of land, to grow sorghum and pearl millets for birds.

“The idea is to mimic nature and grow food the same way it is grown in a forest. No one uses pesticides in a forest or prevents birds from making their habitats. So why should we? Additionally, by killing pests with chemicals we are further depriving the birds of their meals,” Murugan tells The Better India.

Murugan has been extremely accommodating to birds since the ‘90s and he used to sow seeds on the borders of his farm. However, earlier this year, he decided to grow millet and sorghum on 0.25 acre each.

“Over the years, many farmers have switched to cash crops and that has also discouraged the birds from visiting our village. A few months ago, I also saw some farmers throwing stones at birds. That was my motivation to plant millets for birds, and I invested Rs 3,000 for this purpose,” he says. 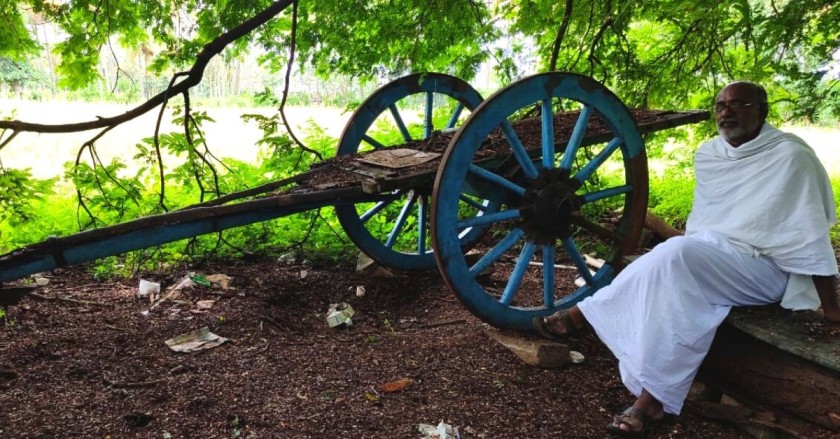 The results have been phenomenal. “Birds (such as Scaly Breasted Munias and White Rumped Munias), peacocks and parakeets are frequent visitors to the farm. It is such a visual treat. During the crisis, we are so busy looking after the humans that we often forget about birds and animals. I am glad I could do my bit.”

A few days ago, Murugan’s friend and wildlife photographer Varun Alagar visited his farm for an assignment and he was in for a surprise.

“Murugan has dedicated his time, effort and most of his savings just so that natural history is preserved. His idea is that the animals haven’t disappeared, they’ve only been displaced by us. If every farmer dedicates a small amount of land for the birds, then there won’t be crop raids by them in concentrated areas,” he wrote on his Instagram post.

Farming In Harmony With Birds

Murugan is locally known for growing a living fence of tall and thorny cactus plants, jatropha and other wild trees. He believes that these leaves of the traditionally-styled fences can be used as compost or natural fertilisers for crops and help birds and animals make it their habitat. Also, droppings of birds in the bio-fence can aid soil fertilisation.

However, if farmers do not have a bio-fence, they can grow food for the winged visitors in multiple areas across their farms. This would prevent all the birds from gathering at one point and destroying crops, he feels.

“It may not be feasible for all farmers to grow crops for birds but there are several ways in which we can allow the birds to play an integral part in preserving our biodiversity. Let us not forget them,” he adds.

Murugan’s simple efforts are a reminder to all us that co-existing with nature may not be as difficult as it seems to be.