Amrita Chaudhury and Sanmitra Pandharpur quit their respective jobs in the US at the peak of their careers and returned to India in the early 2000s to pursue organic farming.

They embarked on their agricultural journey by growing food at home and branched out to supplying to their friends and relatives. Once they were confident in their process, they started distributing in retail stores and markets.

“The mantra for a flourishing organic farm is first to grow your food,” says the Maharashtra-based couple, who registered their company, Offerings Farms, in 2010. 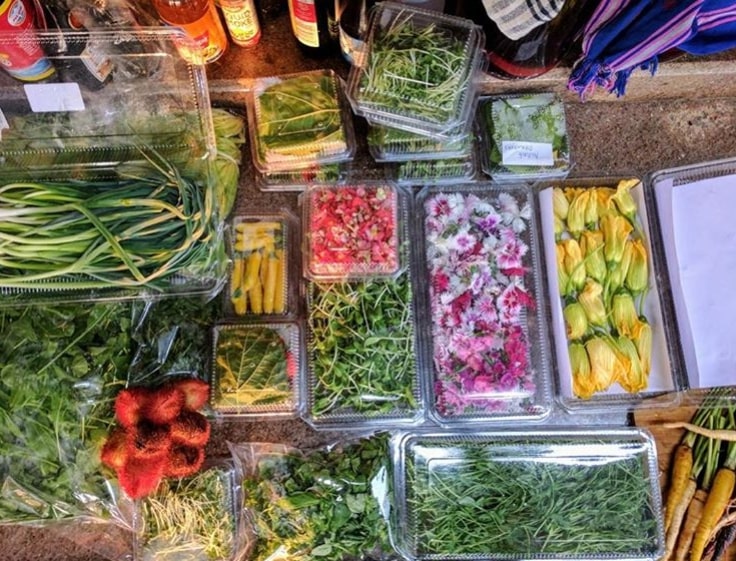 The couple had started growing these healthy and nutrient-rich vegetables and grains way before it became a fad. Naturally, less competition in the market attracted more customers who were genuinely looking forward to making lifestyle changes.

The firm focused on B2B clients and has a wide customer base in Mumbai, Pune, Goa, Gurugram and Jaipur. These include premium organic cafes like Kitchen Garden, The Masque, retailers like Godrej Nature’s Basket, Gourmet Delight, and Zama Organics, and high-end hotel chains like JW Marriot, Westin and Grand Hyatt.

But their transition from IT-professionals to farmers was anything but smooth. 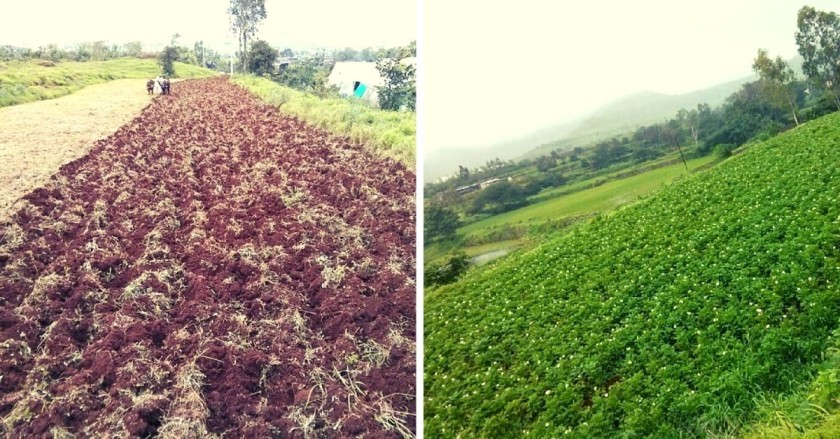 Amrita and Sanmitra were software engineers who were introduced to exotic salad ingredients while working in the US.

“Back in the 90s, I volunteered with several organisations that worked on sustainable development projects for India, which introduced me to environmental issues. Plus, the concept of farmers’ markets further ignited my interest in organic food. I wanted to grow fresh food in my backyard,” recalls Amrita.

So, she quit her job and returned to India in 2000, hoping to purchase a small piece of land and farming there.

She, however, took up another job and met Sanmitra. With similar life stories and a mutual love for the environment, the two set the ball rolling for the venture.

Apart from Amrita’s mother, who grew basic vegetables at home, neither had any experience or networks in farming. Since the internet was still an alien concept then, the duo started reading books on farming and visited farms to understand the process.

“Books like Tending The Earth by Winin Pereira and The One-Straw Revolution by Masonabu Sukuaka were really helpful. Farmers in the outskirts welcomed us and taught us the basics. We also met with late environmentalist Kisan Mehta to get expert inputs. All these factors gave us the much-needed confidence to begin,” shares Sanmitra.

Instead of acquiring large farmland, they experimented at the household level by growing microgreens and salads, as they were rare to find in their region. Once they were satisfied with the outcome, including taste and nutrition, they involved their relatives and locals.

“We received an overwhelming response and constructive feedback that helped us improve the quality and yield,” points out Amrita.

Through word of mouth, more people inquired about the US-returned couple growing food without chemicals and harmful pesticides.

“The escalation from relatives to customers was very challenging. Farming is a generational occupation that depends on climate change. So there were days when we had committed order but couldn’t fulfill them because heavy rainfall destroyed the plants. Pests and diseases worsened the situation,” says Amrita.

The couple could have saved the yield by using a pesticide that would kill pests overnight, and delivered on their commitments. But compromising their ethics was a strict no from the very beginning.

Dorabjee, an organic retail store, in Pune was one of their first customers, who played a significant role in popularising Offerings Farms. Because of this, their client base expanded, and Godrej’s Nature Basket came through in 2009.

“80 per cent of our marketing was word-of-mouth by our customers. There were very few occasions when we approached retail outlets or hotel chains. Even today, we have a trusted network of chefs and small businesses that spread the word,” adds Sanmitra.

Last November, heavy unseasonal rainfall damaged 54 lakh hectare of crops across Maharashtra. This year too, drought in many parts of the state created havoc, increasing farmer woes. Offerings Farms was also affected. However, while they had a good harvest, the duo went ahead and planted rice.

A major reason behind the flourishing farm is the rotational crop cycle; it keeps the soil intact, seeds healthy, and enhances plant growth.

“We have consciously stayed away from monocropping or practising one style of growing crops. This has tremendously helped us stay afloat through tough times, including during the lockdown. Our ultimate goal is to achieve the ecosystem of a forest where the soil is always covered with vegetation, and where seeds drop and grow on their own, while rainwater seeps underground,” explains Amrita.

In 2007, they purchased their first plot (an acre) and gradually moved to ten. At present, they cultivate on 15-20 acres of land, “We keep on leasing some of the farmland depending on the demand,” she adds.

Building a fertile soil is the most crucial part in organic farming as it determines the activity of microorganisms, protects plants from pest attacks, and increases the yield.

They follow green manuring where plants or crops are specifically grown to turn them into the soil to increase productivity. Uprooted or sown crops are left to wither on the field so that they serve as mulch and soil amendment. Examples include forage or leguminous crops.

Covering the field in compost is another measure. Carbon present in the organic compost helps in building the nutritional needs of the plant; it also promotes microorganisms.

To ensure that soil is always covered with vegetation, the duo practices intercropping and multi-layer farming. For example, a lemongrass patch is grown between blue pea flowers and bananas.

“Recently, we planted coriander with lollo lettuce. The idea is to plant short-term crops with long-term ones so that the field isn’t empty,” says Sanmitra.

For multi-layer farming, crops of different heights are planted together, and they grow as companion plants, “We have planted artichokes (a shrub) underneath heirloom bananas that provide shade. Artichokes attract ladybugs that eat pests and insects.”

The couple is now trying something called ‘chaos gardening’ where a bunch of seeds like radish, beetroot, and corn are thrown together in the soil. They figure out the right space to thrive, and the overall harvest is higher, says Sanmitra.

Another method is no-till farming. Under this, straw generated from oat cultivation is used as mulch to grow tomatoes in the field without tilling. When it comes to keeping pests at bay, the duo relies on neem cake, neem oil, and neem extraction. They also use bright sticky traps to attract insects in one area.

Experiments with no-till March end – oats growing from our 6year old seed stock April end – tomatoes planted into the oat field without tilling May end – finally they find their footing June end – ready to fruit After many disastrous attempts at no till regenerative methods finally some semblance of success.. #notill #organic #regenerativeagriculture #croprotation

As for watering, they use a mix of drip irrigation, sprinklers, and ponds, “We save thousands of litres of rainwater every monsoon and drip irrigation directly waters the roots that helped us cut down our water usage by 80 per cent,” says Amrita. 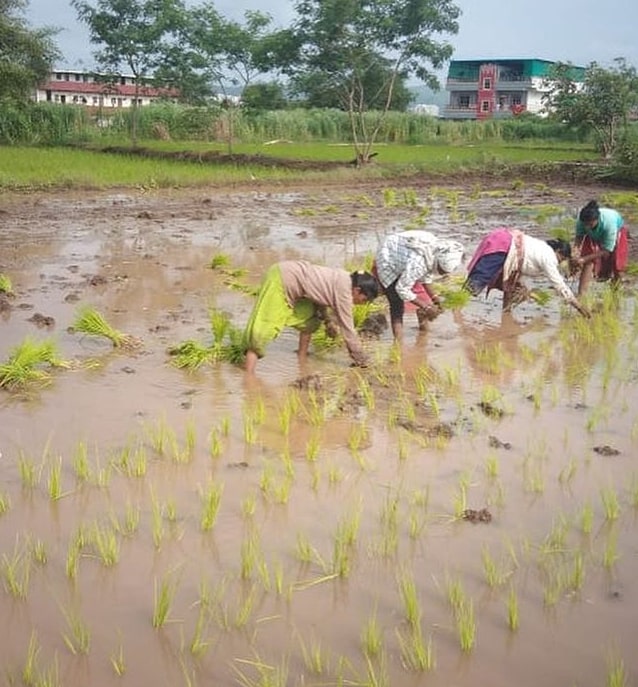 Rampant weed growth is a huge challenge that involves expensive solutions. They hire wage labourers who spend hours to remove the weeds from the fields, pathways, and boundaries. “If we delay this process, weeds become breeding grounds for pests. Of course, weedicide is available, but it contains chemicals,” says Amrita.

“If in conventional farming, corn requires one bag of urea that costs Rs 400, in organic farming, it would need at least two truckloads of bags costing Rs 36,000. Plus, compost does not always ensure 100 per cent elimination of insects. If the virus sets in, a conventional farmer will lose 20 per cent crop whereas we risk 80 per cent damage,” they say.

Relying on natural methods increases their investment costs and the time taken to grow food. Despite these challenges, Offerings Farms refuses to rely on artificial ways. The high investments are reflected in their pricing range which is higher than chemically-grown food. But that has not deterred their customers. 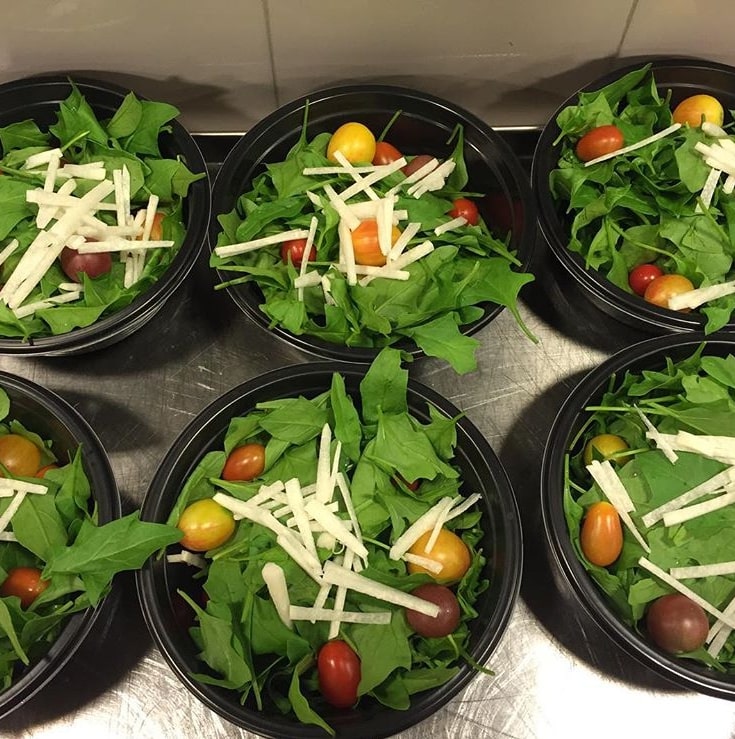 “Our customers are fully aware of our farming process, right from sowing seeds to the final packaging. The quality is something that we never compromise on. So, our loyal customers are satisfied with the pricing,” they say.

Vanika Choudhary, the founder of Sequel, an eatery in Bandra, Mumbai, is one of the happy customers.

She says, “About five years ago, I was putting together the concept and business plan for a farm-to-fork restaurant. I came across Offerings Farm after extensive research. I fell in love with their produce because of the quality. We launched Sequel four years ago and subsequently set up a greenhouse at their farm. It is amazing how they have scaled up over the years to meet our requirements and remain willing to grow exclusive produce based on our menu.”

That said, the firm is proactively working to reduce prices as they move towards developing a forest-like cycle where inputs are less. Recently, they reduced the lettuce price from Rs 200 per kilo to Rs 175.

From growing 1-2 vegetables at home to a farm that gives healthy and organic food to hundreds of people, Amrita and Sanmitra have come a long way. Their only advice to budding farmers is to grow their food first, and then think about doing it commercially.

All images are sourced from Offerings Farms. Get in touch with them here.