When we talk about the toxins in our home, the usual suspects include the chemicals in our foods, cosmetics and personal care products. That’s why when attempting to embrace a safe, eco-friendly lifestyle, one of the first changes most of us make is shifting to naturally-grown food and non-toxic cosmetics. But, many of the toxins in our home lurk in the very products that claim to protect us – like detergents. It is difficult to think of these products as harmful. After all, we have been using them every day for years; they haven’t left any visible signs of damage, and, if they were really that dangerous, they wouldn’t be used by so many people.

However, the truth is that although detergents leave your clothes smelling like a summer breeze, they often contain a mix of harmful chemicals that have negative side effects on our health. Not to mention that they damage our clothes and leave them faded and worn out. What’s more, every time we wash our clothes, these chemicals wash into our sewers and pollute our waterways.

Our skin is the largest organ in our bodies, and the chemicals in our clothing and sheets are absorbed into the body through its pores all day. Chemicals in laundry detergents are linked to a range of adverse health impacts – from benign rashes to more serious ailments including cancer as well as birth and developmental defects.

Let’s take a look at some of the harmful contents of our detergents:

Identified as a human carcinogen, 1,4-dioxane is a common ingredient in detergents and shampoos. It is used as a solvent and degreaser. Experimental studies on rats and other lab animals have shown that exposure to dioxane can cause benign and malignant tumours in different parts of the body – from the mouth to the liver. In humans, contact with residues contained in detergents results in exposure. 1,4- dioxane is easily absorbed through the skin and by inhalation. It also leaches readily into the soil and groundwater, contaminating the municipal drinking water supply, and increasing the risk of exposure by ingestion.

SLS is a foaming agent used to make detergents, soaps and shampoos froth. SLS can be derived from petroleum and coconut or palm oil. Essentially, it makes detergents effective by allowing water and oil – two immiscible substances – emulsify and be easily lifted off dirty clothes. SLS is widely used because it is inexpensive and effective. SLS is known to irritate human skin and is often implicated in conditions such as eczema, rosacea and psoriasis. It is best avoided by those with sensitive, allergy-prone skin. 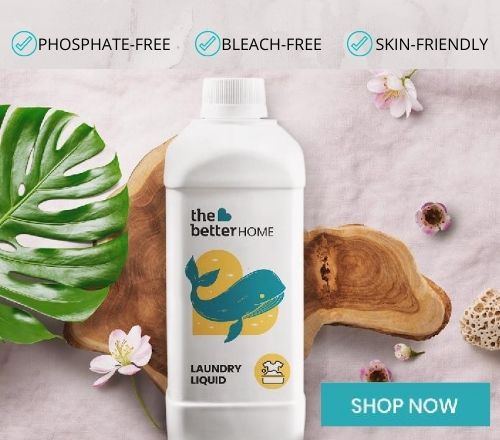 Often hiding under the label term Sodium Hypochlorite or the catch-all term ‘optical brighteners’, bleach in detergents is meant to make clothes, especially white ones, appear whiter by converting UV light to visible light. When it comes in contact with the skin, bleach can cause allergic reactions. It is an eye and lung irritant and is toxic to marine organisms.

Formaldehyde is a low-cost preservative and antibacterial agent commonly used in detergents and dishwashing liquids. It is a known irritating agent to the respiratory system, eyes and lungs. Regular contact with formaldehyde can cause allergic reactions such as eczema and contact dermatitis. Daily contact with formaldehyde is toxic to humans and has been linked with cancer. Check your detergent label for mention of this ingredient or look up the manufacturer’s website for more information.

Phosphates make detergents more effective by reducing the action of calcium and magnesium and making water less hard. The most commonly used phosphate in detergents is sodium tripolyphosphate. Despite their effectiveness, phosphates have been banned in several American states and European countries because of their adverse impact on water bodies. Phosphates lead to the buildup of algal blooms in lakes and rivers, which deprives marine organisms of oxygen supply, thus killing them. An eco-friendly laundry detergent is one that is phosphate-free and does not degrade natural eco-systems.

A notorious chemical that is a known endocrine disruptor in humans and animals, nonylphenol ethoxylated is banned in several European countries, but not in India. The UN Environment Programme (UNEP) identified it as a chemical of global concern in its region-based Assessment of Persistent Toxic Substances. It disrupts endocrine function by mimicking estrogen, so that, with repeated exposure, our bodies won’t be able to tell the difference between estrogen and nonylphenol ethoxylate. The chemical is not biodegradable and remains in the soil, groundwater and surface water bodies for several years where it is highly toxic to marine organisms.

The most commonly used benzene-based surfactants in laundry detergents are alkylbenzene sulphonates (ABS) and linear alkylbenzene sulphonates (LAS). Surfactants lower the surface tension between the liquid and the stains on clothing, suspend the dirt particles in the water and make them easier to dissolve and wash off. Indoor air has high levels of benzene, emitted by household products such as detergents, paint and furniture polish. It irritates the skin, nose and eyes, and is toxic to aquatic life.

The fragrances in laundry detergents are a mixture of about 4,000 chemicals, many of which are petroleum derivatives. We smell them because they vaporise into the air where they release harmful Volatile Organic Compounds (VOCs) such as terpenes which pollute indoor air. Harsh artificial fragrances are known to irritate the respiratory system and cause problems such as asthma. Opt for a detergent that is fragrance-free or contains a mild aroma.

The Better Home laundry detergent contains natural surfactants that are gentle on your clothes, safe on your skin and pollution-free for water bodies. Subscribe and save up to 35% today.